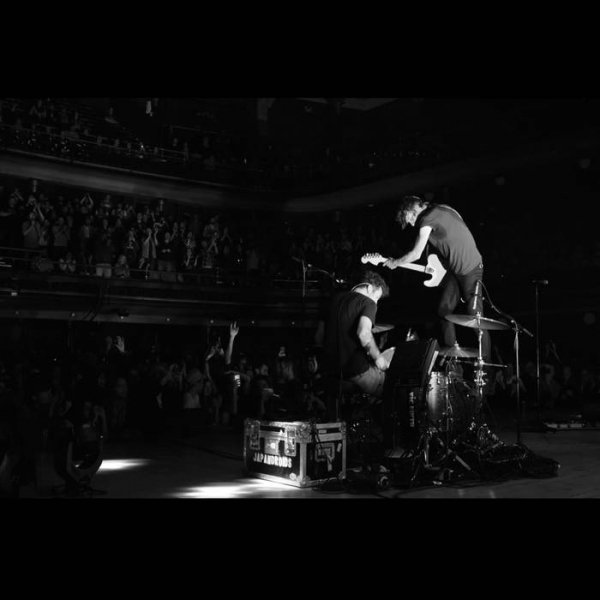 There’s a few reasons why Japandroids never thought they’d play one of Canada’s most famous venues.

For one, Massey Hall is a seated theatre - not a natural setting for high-octane rock and roll. For another, it holds 3000 people, and once you’re playing in front of an audience that size, you perhaps cease to be what the duo had always prided themselves on being: the kind of down-and-dirty punk outfit that’s most at home in balmy sweatboxes.

And then, in practical terms, there was the fact that Japandroids had been a Vancouver band from the outset; sure, singer-guitarist Brian King had departed for the capital ahead of 2017’s Near to the Wild Heart of Life, but he was splitting his time between Ontario and his girlfriend’s place in Mexico City. In short, Massey Hall had never really been on the pair’s radar - literallly and figuratively, it had always been two thousand miles away.

And yet, that’s where they found themselves for one October night only, as they took Near to the Wild Heart of Life on a North American victory lap. Now, it forms the basis of their first live album. Depending on your outlook on the format, Japandroids could be either the perfect band for this sort of release, or the least suitable. On the one hand, their shows burn with such irrepressible energy that if anybody could ever have that carry through the speakers at home, it’d be them; on the other, to shear a Japandroids gig of the crowd and the visual aspect of King and drummer Dave Prowse’s Herculean physical efforts is to take more away than you would be doing from the average show.

Still, as much as they couldn’t have known it nearly three years ago, pale facsimiles of the live experience are now the norm in 2020 and what makes Massey Fucking Hall an overall success is that it represents a particularly visceral aspect of live performance - not the communion with other fans, or the technical achievement that comes with a particularly slick stage show, but instead the primal joy of noisy, boisterous rock and roll. This is a deafening, breakneck run through the catalogue, with room for everything from signature soarers "The Nights of Wine and Roses" and "Young Hearts Spark Fire" to the more panoramically epic likes of "Continuous Thunder" and the standout, an atmospheric take on "Arc of Bar".

Taken in the context of the surrounds in which it was captured, Massey Fucking Hall hints that perhaps grander environments always beckoned for Japandroids; "The House That Heaven Built" and its runaway singalong feels like it could sprawl out over infinitely bigger audiences than the one this take was cut In front of. Most crucially, though, the album arrives at a time when we crave real live music more than ever. All of Massey Fucking Hall’s little imperfections - King’s road-worn vocals, the fluctuations in tempo, the scuzzy, unvarnished guitars - are a stinging reminder of what, for the time being, we’ve lost, and what cannot be replaced by any amount of homespun livestreams. Until the world’s back on its feet, this is something to cling to.