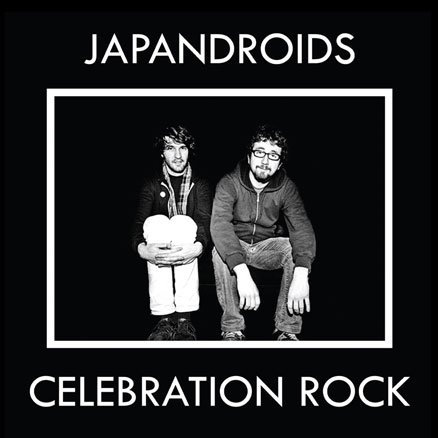 Japandroids know that you can’t call an album Celebration Rock and not start and end it with the sound of fireworks. Of course, that leaves its reviewers with one less metaphor to play with, but what can you do? Just imagine I’ve already said something about the record fizzing and popping with excitement, and we can get down to business. Anyway, that’s how ‘The Nights of Wine and Roses’ kicks off, fading in on a wave of fireworks, feedback and distant drums; then, after a slow walk towards the band, the noise hits you right where it counts. “WE DON’T CRY FOR THOSE NIGHTS TO ARRIVE, WE YELL LIKE HELL TO THE HEAVENS!” scream Brian King and David Prowse, in tones to which caps lock can barely do justice. As the pair encroach on their thirties, they know that partying isn’t everything… but as a means to an end, they could do worse.

So, this new Japandroids LP. It’s loud, it’s fast, and it’s pretty damn relentless. The life-or-death madlibs that make up its song titles could have been easy to predict – ‘Continuous Thunder’, ‘Adrenaline Nightshift’ – but the increased sense of perspective and verbosity were not. There will be no smirked urge to “French kiss some French girls” here – now, the stakes are much higher: they’re craving “blitzkrieg love and a Roman candle kiss”, and enjoying “one restless night I’ll nurse for years”. No longer weekend warriors, Japandroids spend the entirety of their second album declaring war on boredom.

There are still plenty of WOOOOAH-OHHHHH! moments to keep your fists pumped – ‘Evil’s Sway’ even cribs its “OH YEAH! ALRIGHT” hook directly from the perfect pop of Tom Petty’s ‘American Girl’ – but they’re always tempered with lines that make you stop and think hard. “On the lash and lashing out, it’s evil’s sway tonight”, that track continues, while the incredible single ‘The House That Heaven Built’ – which occupies the same sonic territory as, say, Darkness-era Springsteen or Titus Andronicus at their most boozedly bookish – offsets its wordless chorus with the all-or-nothing cry “YOU’RE NOT MINE TO DIE FOR ANYMORE, SO I MUST LIVE!”

Allegedly, the idea behind Celebration Rock was to split the album’s two sides between the more aggressive numbers and the poppier stuff, which would make sense if there even was such a divide in the band’s material; the choruses are no less huge on side one, just as side two doesn’t exactly skimp on the energy. The closest thing to a weak link comes at the end of side one with a pretty straight-ahead cover of The Gun Club’s ‘For the Love of Ivy’. Their motives for including it are sound – exposing more people to the (sha)manic insanity of Jeffrey Lee Pierce can only be a good thing – but their version doesn’t quite gel with the rest of the album.

But a complaint like that is like a Come Dine With Me contestant bitching about not having matching cutlery or something; Celebration Rock is monumental – the pair may claim it was casually tossed together, but it somehow sounds (mostly) coherent, and just plain HUGE. It may be less boneheadedly upbeat than Post Nothing - there are at least triple the amount of words in each song here, which gives more room for both morning-after regrets and overlong analytical reviews like this one – but it’s still one hell of a trip. Celebration Rock is just completely fucking joyful. Think about LMFAO and their brand of ‘Party Rock’; that’s all there is to it – it’s a cluster of balloons, sellotaped to a garish living room wall. Celebration Rock is cigarette butts, spilt beer, hoarse voices and the smell of stale dope smoke. This is REAL party rock, and like the best nights out, it leaves you sweaty and exhausted and ready to do it all over again. Unlike the best nights out, however, you don’t have to wait another day to do so.