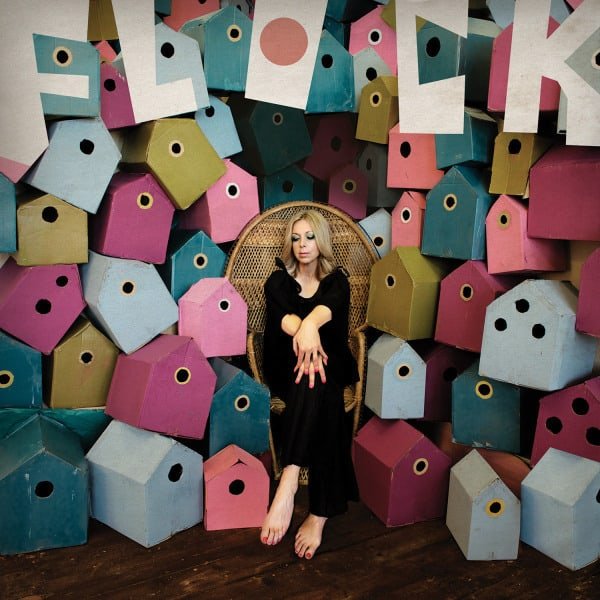 Most artists struggle to ever locate anything approaching a signature sound. Having already established a totally unique position amongst the crate-digging hordes of vintage synth lovers and purveyors of kosmische repetition, the pop-savvy yet still uncompromisingly ‘other’ Flock finds Jane Weaver do so for the second time. The infectious results practically demand listeners to, well, flock to this underappreciated songwriter, musician and producer.

Perhaps the irrepressible hooks and rejoicefully juicy grooves that characterize Flock – best of which bring up vivid impressions of Funkadelic jamming with Tangerine Dream, or Prince developing a Hawkwind habit - are an inevitable development. 2015’s The Silver Globe and 2017's Modern Kosmology stood out amongst a procession of Can and Neu! aficionados due to Weaver’s blanket refusal to give in to the usual stoned noodling of artists who spend their disposable income on rare 1970’s German vinyl and malfunctioning vintage kit. Having found a comfortably fitting sound after earlier dabbles with psych-folk and indie-rock, Weaver stood pretty much alone in her ability to combine motorik momentum-building with dense, synth-saturated atmospherics with soaring songcraft.

If the recent one-woman live reinterpretation of those albums’ material (Loops in the Secret Society) leaned heavy on its abstract and experimental potential, Flock represents the sweet revenge of the melody: dancefloor-friendly pop music, but of a variety that remains intoxicatingly unmoored to the conventions and codes of the earthly realm.

Take first single “The Revolution of Super Visions” as an example. Blessed with plenty of fresh wide open spaces between the sparingly administered notes, the track’s chicken-scratch funk guitar strokes and rubbery bass bubbles bring to mind something George Clinton might have cooked up in the early 80’s, had Parliament ever directed the mothership to Can’s studio: maximalist funk-pop with minimalist ingredients. “Pyramid Schemes” is an even more successful example of Weaver’s brave new method of stripping away dense layers of sound to expose the full bounce of the tunes and the grooves.

It’s not all mirror ball-hugging disco queen moves, however (and even when it is, Weaver’s ear for the unusual places this particular dancefloor somewhere on the furthest and headiest fringes of the cosmos): the flute-saturated, gently galloping title track resembles the pastoral prog-funk of Dungen, whilst the majestic upward trajectory of the synth-heavy dream-pop closer “Solarised” defies categorization while it floats weightlessly amidst the cosmos, as heartwarming as a beautiful sunrise.