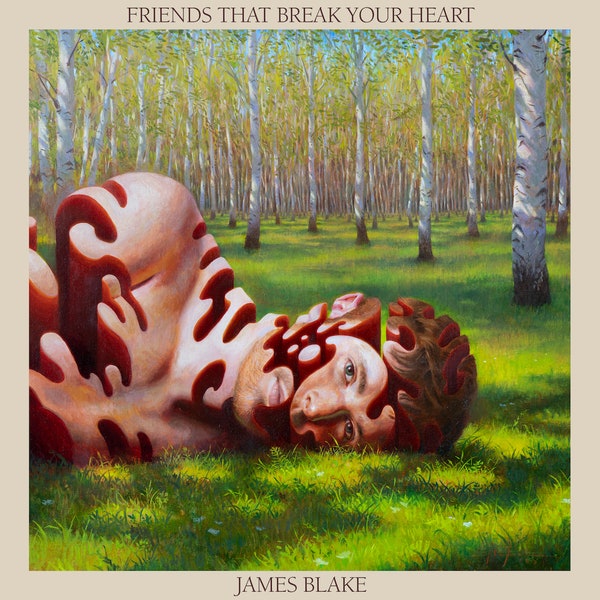 Friends That Break Your Heart is a pretty on-the-nose title, even by James Blake’s standards. But this isn’t a return to the early melancholic Blake that the title suggests, nor is it a continuation of the most recent Blake, bowled over by love. His fifth studio album is intriguingly somewhere in the middle.

It’s the sound of a man plagued by self-doubt as every last stumble runs through his head. Reckoning with the person he is and the person he wants to be, all while trying not to let the cards he’s been dealt break him. “I put my best foot forward / What else can I do?”, he laments with a resigned acceptance on “Foot Forward”. It leads to an odd feeling of hope amid the anxiety; old Blake and new Blake coalescing.

As with most Blake records, the naval gazing veers into the torturously twee. “Funeral” can feel like reading a sixth-form poet’s diary with lines like “You know I should live by the sea / ‘cause I feel invisible in every city”.

But it mostly lands because Blake has moved on from the frosted glass distance of albums like Overgrown. This is the new/old Blake. The lovestruck lightness and warmth of Assume Form coming head-to-head with the kaleidoscopic texture of CMYK. For an album about self-doubt, he’s more confident than ever behind the desk.

“I’m So Blessed Your Mine” is a collision of grand orchestral spectacle and claustrophobic electronics. It brings an interesting air of unromanticism, as though he’s still trying to figure out what he’s been handed. “Show Me”, a glorious duet with Monica Martin about watching someone become their best self now he’s not around, is as delicate as a snowflake. Tumbling and evolving as it glides along.

Friends That Break Your Heart’s guests may not reach the dizzying heights of Andre 3000 on “Where’s The Catch?”, but “Frozen” sees J.I.D. and SwaVay’s vocals warp and twist around Blake’s ghostly whisper like a battle between his shoulder angel and devil.

Even through all the self-doubt, the acceptance of less than he’s worth, Blake closes the record on a high. On “If I’m Insecure” he questions, he speculates, but in the end love conquers all. Yes, friends might break your heart, because the end of a friendship is never as clean cut as a relationship. But he’s starting to see the freedom in that. How he, and they, can blossom. Blake’s a master at making heartbreak sound beautiful. Now, on Friends That Break Your Heart, he makes it sound like something in service of the best version of yourself.