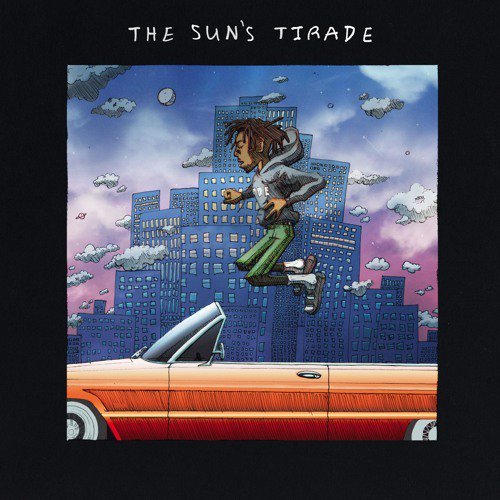 Aside from two phenomenal stand-alone singles in “Nelly” and “Smile”, 25-year-old Isaiah Rashad has been awfully silent in the two short years since he released his debut album - Cilvia Demo - for Top Dawg Entertainment (home to Kendrick Lamar, ScHoolboy Q et al).

Initially, a lot of people speculated that he had just faded into obscurity – an easy trap for an upcoming rapper to fall into after a tough-to-beat release – but it turns out that he was recovering from addictions to alcohol and Xanax that had escalated during his worldwide tour with his labelmate ScHoolboy Q in 2014.

Rashad’s recent struggles naturally loom over his new album, The Sun’s Tirade, thus making it a much more personal release than Clivia Demo; addiction’s a life-long battle, and it’s on Rashad’s mind throughout – he even taunts himself on the seven-minute epic “Stuck in the Mud” to cave in and “pop a Xanny, make your problems go away”. There’s also a sense of desperate dependency on “Rope // rosegold” (“When I’m sober I might testify that this world has fallen out of place”) and the Kendrick Lamar-featuring standout “Wat’s Wrong”: “You got two Xannies, just don’t forget me / Love me for the moment, hug me like a sibling”. Seldom has the nut-busting masculinity that overrides contemporary hip-hop been so open with regards to emotional weakness and vulnerability.

The unsettling irony of this album is that it sounds mellow as hell. And it’s amazing - Rashad’s raspy-suave flow floats over subtle jazz-inflected beats, sounding like Vince Staples hotboxing a Cadillac. The Sun’s Tirade is never boastful or bloated, generally tending to stray from ubiquitous hip-hop debauchery. And, while the album may have been crafted during a two-year tsunami of struggle, Isaiah Rashad still manages to sound as calm as an ocean’s gentle waves; sounding so effortless has never taken so much effort.