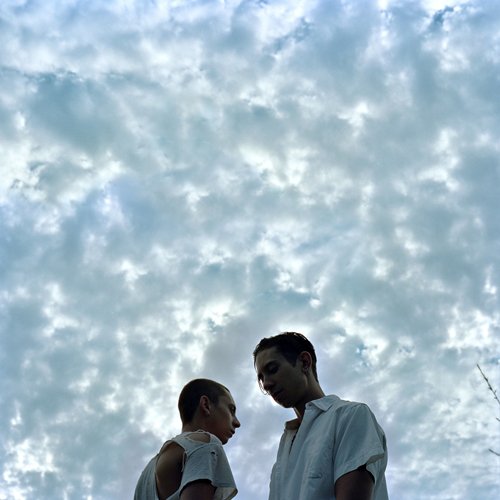 There are worse things to be than too cool, I guess. The idea that you’re listening in to some awesome fashion party that you’re not personally hip enough to be at exists in the not too distant background all the way through the brothers inc.’s debut No World. Yet there’s certainly a soul to this often genuinely emotional record that’s led me to regard it as a slightly more convincing take on the same hazy sound that label mates Indians are currently peddling. And, as it does with most bands, it helps that inc. have almost certainly listed to a fair bit of Sign ‘O’ The Times era Prince, paying attention to his more despondent, introspective moments rather than ‘Raspberry Beret’-like flourishes of colour.

inc. have a very distinct shtick, one that updates classic ’80s pop but removes its most joyous excesses and replaces them with a modern, electronically-led wistfulness, and in turn sees them create something they can proudly call their own. It’s highly impressive when it works, but they refuse to shift from it when perhaps a bit more attention to dynamics – a little less here, a little more there – would elevate it to the status of a really fine record. As it is, their 4AD debut is as promising and occasionally mesmerising as it is slight and frustrating.

Though it tails off, it starts wonderfully, and how much you enjoy No World’s second half will entirely depend on whether you thought the successes of its first were so great that they were worth repeating within the following 20 minutes. Opener ‘The Place’ does a sterling job of hitting a middle ground between gentle and curiously catchy in a way that Sade saw Jessie Ware update so commendably last year. Following it with the sensual guitar riffs and general, erotic but oddly androgynous vibe of ‘Black Wings’ gifts the album a strong initial double punch, heading down to the same well of inspiration that birthed ‘The Place’ but emerging with something slightly different. It’s a good sign that a band can be coherent but yet rewardingly diverse, a trick that’s followed up with ‘Lifetime’, which sounds like Justin Timberlake thumbing through the most recent MySpace end of year financial report – understandably a little despondent.

‘5 Days’ however stops the trend of each number being a bit of a step on from the last, harking unapologetically back to the triumphs of ‘The Place’ for a song that sounds like the duo have put on Michael Jackson’s ‘Remember The Time’ at the wrong speed and decided that it sounded better that way. The arrival of ‘Trust (Hell Below)’ initially suggests this lack of inspiration might be just a blip, as it’s great – not only does the title sound like a D’Angelo song, but the track itself could pass for one of his too. They did this pretty well on the title track of their fine first EP Swear, but do it even better here. It’s all incredibly sultry, possessing just enough of a tune to get you slapping parts of your body against other parts, but not so melodic that it takes over from what’s really doing the work here – the overall atmosphere of sophisticated filth.

However, standards are sadly allowed to slip from thereon in. Come the dawn of yet more distant synths and husky vocals on the mid tempo ‘Angel’, they’re retreading themselves – something they seem to enjoy doing, as bar the flourish of a little additional bottom end in the choruses, they give it another go on the following ‘Seventeen’. They’ll snap out of it, you think, but then ‘Desert Roses’ seems to be plucked from the same place as ‘Black Wings’ earlier – all wobbling guitars and distant handclaps for percussion. Completely unnecessary filler like ‘Your Tears’, a minute and a half of forgettable instrumental wooziness, and the closing ‘Nariah’s Song’ don’t help either. It all leaves one with a disappointingly ambivalent feeling about the end of an album which had offered so much in its most inspired, earlier moments.

What are inc., exactly? Maybe we shouldn’t worry so much. Sometimes it’s fine to come to the end of a debut album and not have things like that figured out yet. These are young dudes, remember. As is evidenced by their apparent dislike of switching their sound up, inc. certainly come across like they know what it is they are. They’ll just need to get a bit better at communicating it, s’all. At its best, No World has bought them enough favour to ensure we’ll stick around to see them give that a go.