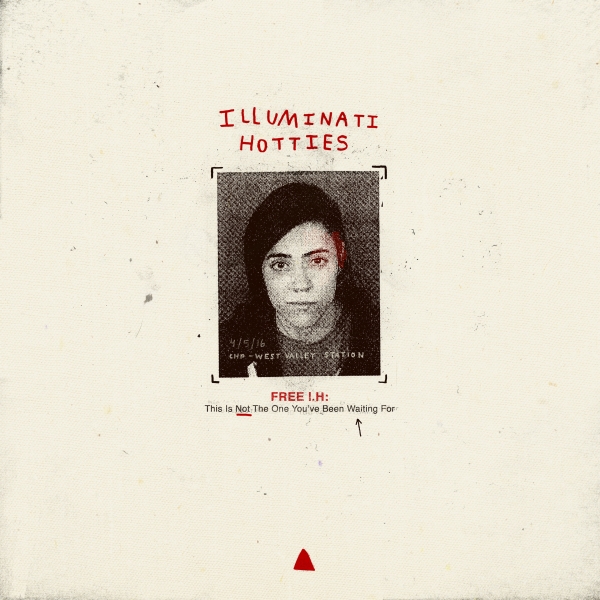 It seems that all it took for Illuminati Hotties to drop the ‘tender’ from their self-ascribed ‘tenderpunk’ label was a bust up with their record company.

Trapped in an asymmetric deal and in dire need to escape, Illuminati Hotties’ case was in no way unique. Acts from Adult Mom to Taylor Swift have filled plenty of column inches with their own tales of debilitating label experiences, highlighting an age-old discrepancy between what’s always been done and what should be done. So what to do? Well, Sarah Tudzin, the nucleus and vocalist/guitarist in Illuminati Hotties, decided the only way out was to write her way out of it. Specifically, writing a combative, abrasive, and intermittently heavy way out of it.

Where Illuminati Hotties’ debut, 2018’s Kiss Yr Frenemies, opted for a tender and whimsical approach, Free I.H. draws on discordance and frustration to get its message across. Tudzin’s work as a producer for acts such as Slowdive and tours with PUP no doubt inform the pivot in style, but its deployment is all Illuminati Hotties. Propulsive opener “will i get cancelled if i write a song called 'if you were a man you’d be so cancelled'” is a bristling intro, questioning the efficacy of the music model with the opening exclamation “let’s smash to a podcast”. Elsewhere, the Tudzin’s tirade against her record label is direct and blatant. On “free dumb”, Tudzin opens proceedings by asking, bewildered, “while the world burns how could you care about a fucking record?”. Both sad and sparking with animosity, it’s a style running through the fabric of the record, calling to mind the erratic emotional forays of Los Campesinos!.

While the headline for Free I.H. is likely to revolve around Illuminati Hotties’ troubles with their label, the record is more than just a protest. If Kiss Yr Frenemies detailed a young person navigating relationships and modern life, then Free I.H doesn’t represent so much a jump as a forward step. Tudzin is a master of avoiding oversentimentality and maintaining earnestness, whether she’s singing about capitalism eroding a sense of self-worth (“freequent letdown”) or the modern addiction to consuming maximum volumes of soulless content (“content/bedtime”). Far more than an angry reactive, Tudzin proves herself to be a wily observer and highly competent commentator, as capable of a considered repose as she is a cutting catchphrase.

On closer “reasons 2 live”, Tudzin peels back the layers to expose her most skeletal performance on the record. Admitting the seeming paradox of both her privilege to work in a job she loves and an occasional desire to die, she embarks on an intimate thanking of her closest friends and what they bring to her life. A grounding following the frustration characterising most of the record, “reasons 2 live” is also the most convincing moment indicating where the ownership of Free I.H. really lies. Sticking her middle finger to the man while continuing to express tropes first explored on Illuminati Hotties’ debut, Tudzin didn’t only write her way through label issues, but into a position of greater empowerment. A strident show of strength that should keep the road ahead clear. For now at least.