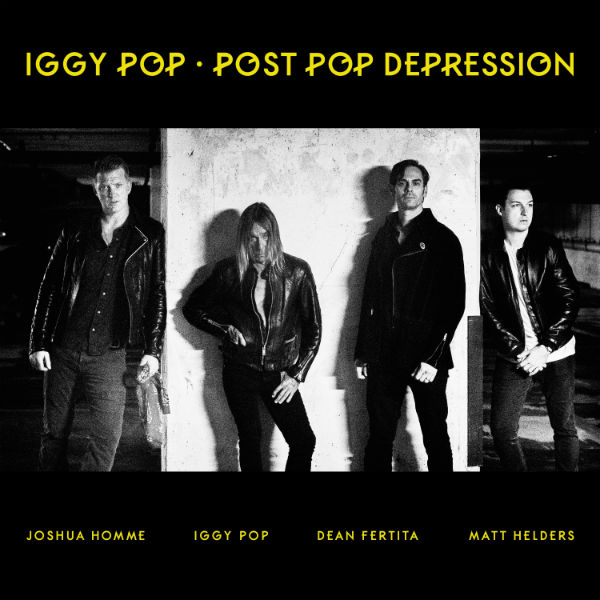 One problem with being a legend is the weight that comes with being legendary.

As Iggy Pop pointed out in a recent interview, the loftier your standing, the less likely it is that anyone's going to challenge you. All you need to do is turn up and offer an inevitably diluted version of what made you famous in the first place, which handily explains oceans of sub-standard product from Giants of Rock of a certain vintage.

The man formerly known as James Osterberg should know what he's on about. As the frontman of The Stooges, the 68-year old Miami resident is one of the ultimate rock 'n' roll heroes, an unrepeatable one-off packed to the hilt with charisma, wit, attitude and energy, possessing a carefully calibrated ratio of clever and stupid that - when applied appropriately - results in truly mind-blowing rock music.

However, it's been decades since anyone - Pop himself included - had a totally steady hand when it comes to channelling Iggy's talents in a recording studio. "I'm Bored", "Candy", "Wild America"; there have been glimpses of what Pop's capable of, but you'd have to rewind all the way to 1977's classic twin offering The Idiot and Lust For Life - produced and co-written by David Bowie, who rescued Pop from personal and professional calamity following The Stooges' messy 1974 demise - to locate truly satisfying, unified albums. The reunion with The Stooges resulted in incendiary live shows, but the two studio albums they came up with before the deaths of Asheton brothers Ron (guitar) and Scott (drums) put an end to the band's saga blew it by playing it as dumb and un-ambitious as much of the boringly predictable, blinkered punk rock the Ann Arbor, Michigan quartet's pioneering efforts to distil rock 'n' roll down to its purest, most exhilaratingly unhinged and primitive elements went on to inspire; as follow-ups to the holy trinity of The Stooges (1969), Fun House (1970) and Raw Power (1973) (the latter two at least belonging on any serious list of the greatest rock records ever made), they're best forgotten.

If it follows that Pop is now best known for his superb BBC Radio 6 show and those car insurance adverts, the dark, diverse and vibrantly pulsating Post Pop Depression deserves to drag the spotlight back to his work as a musician. As a co-writer and producer, Josh Homme's credentials as the pre-eminent architect of bone-dry desert rock aren't quite up there with the visionary genius of Bowie. However, the Queens Of The Stone Age mainstay, aided by Arctic Monkeys drummer Matt Helders and multi-instrumentalist Dean Fertita, locates a throbbing, richly detailed yet resolutely uncluttered groove that's not excessively restrained (a problem with such recent un-Iggy Iggy albums as Avenue B and Preliminaires) but doesn't indulge in foolish attempts to snarl and rage like The Stooges either; this is material that - metaphorically speaking - the famously shirtless Pop could perform fully clothed, mature without sounding stale or safe. Post Pop Depression doesn't really sound like anything Pop's done before, yet it sounds unmistakably, naturally like an Iggy Pop album, a very good and, at its frequent best, impressively alive one, proving that what Pop really needs is a collaborator who understands how best to frame his unique talents

Much has been made of recent reports that after this album, Iggy Pop will revert back to plain old James Osterberg for good. Judging by the foreboding undercurrents of much of the material (check out the angelic choir and mournful strings the scruffy disco groove of the truly fantastic "Sunday" blooms into), Pop might even be serious about retirement. "All I've got is my name," he half-sighs at one point, suggesting there might not be much to go back to once the Iggy Pop persona has been packed away. Elsewhere, sex, death and - most entertainingly, on tracks such as the initially jarring riff-fest "In The Lobby" that gradually gels into a real gem - disgust at vacuously superficial modern life lurk behind every corner; the superb stop/start strut of "Gardenia" - reminiscent of "Sound and Vision" to the point where it could be a tribute to Pop's most legendary collaborator, had the album not been completed before Bowie's passing - provides a hypnotic backdrop to a tale of pure lust, which - just before things get a bit uncomfortably slimy - turns the spotlight on the sorry circumstances the song's subject and the men who ogle her find themselves.

Rammed full of more hooks than some recent Iggy albums combined, the spooky "American Valhalla" is even more impressive with its tragi-comic ("death is the pill that's hard to swallow") reflections on the inevitable doom that awaits us all. Saving the best until last, the breezy beach-rocking escapism of "Paraguay" collapses into a feverish, all-chanting, guitar-butchering rant against the information overloads and compulsive exhibitionism that threaten to consume us all that, sounding all the more powerful for all the (relative) sophistication of what's come before it.

A bit more of such, er, raw power in place of a few overworked moments (the stodgy "German Days" gets a bit too oompah for its own good) would've made Post Pop Depression pretty much perfect. As it is, the carefully sculpted yet still admirably, ahem, loose album is strong enough - to paraphrase the easy glide of another bull's eye - to render even the odd spot of shit into "Chocolate Drops". "I've got all I need and it is still in me," Pop croons on "Sunday". He's not lying; it may have been misplaced for a while, but Iggy's definitely still got it.