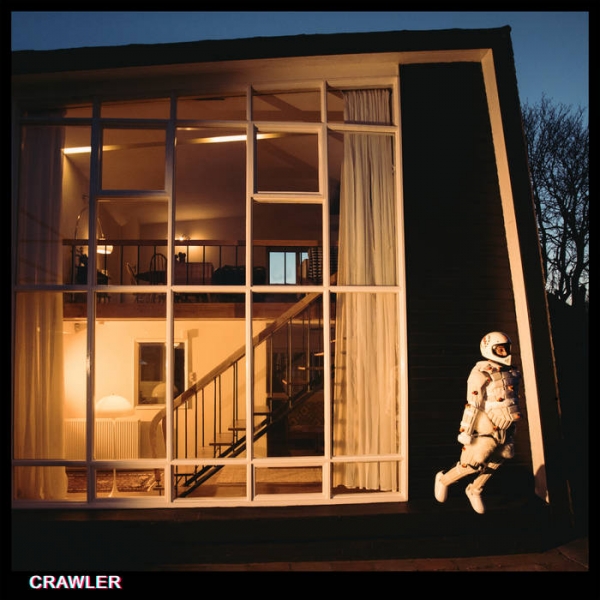 IDLES have been in a bit of a holding pattern since Joy as an Act of Resistance. The Bristol band’s 2018 album made them festival mainstays and one of the biggest new bands in British rock. Meanwhile, 2020’s Ultra Mono doubled down on every part of the IDLES formula, netting them their first UK number 1 album. Everything was bigger, blunter, and noisier, with the band stripping any semblance of subtlety from the equation, for better or worse. Some loved it, some hated it, but one thing was becoming abundantly clear: IDLES were beginning to hit a ceiling. They would have to change things up next time around.

CRAWLER certainly offers that needed change, even from its first moments. Fans have come to expect tremendous gut-punches from IDLES openers, but “MTT 420 RR” abandons the band’s roaring rock machine for a textured, quietly buzzing introduction. It’s dark and dense, dissecting a car crash in gruesome detail. The same motif reappears for “Car Crash,” this time framed amidst an abrasive industrial maelstrom and rapped verses, courtesy of Talbot.

CRAWLER is IDLES at their most bracing and destructive, set directly against their most intimate and adventurous material. Fans may recall when Talbot sang “Look Ma, I’m a soul singer!” on “The Lover.” Well, the record’s emotional cornerstone, “The Beachland Ballroom” makes good on that promise; Talbot takes on a hoarse, crooning howl while the band backs him up with their best Motown impression. Meanwhile, “Progress” is an otherworldly electronic dreamscape, one that transitions with a final click into the 30-second grindcore frenzy of “Wizz.” Of course, there are also the requisite amped-up highlights like “The Wheel” or “Crawl!,” as well as the unhinged dance-punk grooves of “The New Sensation,” all of which will fit well in the band’s blistering live sets.

Though there are no outright anthems on the level of “Danny Nedelko” or “Model Village,” the band’s more experimental bent also finds them looking inward more than they have since Brutalism. As much as CRAWLER is another step in the band’s evolution, it is equally an exploration of the dark corners of addiction and trauma. The record is largely devoid of IDLES’ signature political “sloganeering” and blaring affirmations. Hints of the band’s humor bleed through the lyrics, but they’re largely tinged with the edge of bitter self-analysis, as on “Crawl!” (“God damn I’m feeling good, said the liar to the congregation").

Yet, after all the record’s drug-addled nights, bloody car crashes, and searing self-hatred, the band once again ends the proceedings with a moment of hard-won hope. As Talbot explains, “Before his assassination, Trotsky knew that Stalin's men were coming over to kill him. He knew he was going to die. What did he do? After watching his wife out in the garden, he wrote in his diary, ‘in spite of it all, life is beautiful.’” Talbot closes the record on those same words. Once again, the band finds healing and beauty in their own chaotic vortex, and once again they invite everyone listening to do the same, joining them on their most exploratory and cathartic ride yet.