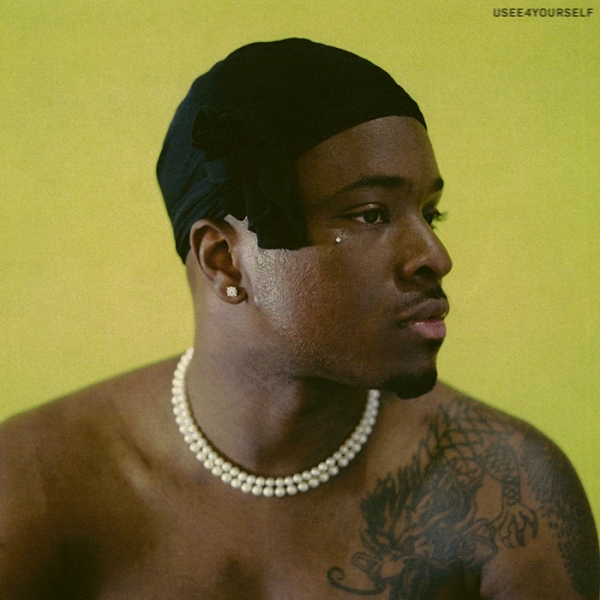 IDK has had nothing if not an unusual career trajectory. Beloved by his fans as a beacon of positivity, he built hype through a series of strong mixtapes, culminating in the truly excellent, studio album level IWASVERYBAD, but he declared even this unworthy of his proper debut album.

Then 2019’s Is He Real, hyped as the long awaited debut proper, simply faltered. It wasn’t bad, it simply seemed uncertain of itself, pulling in too many directions alongside some unfortunately half baked musings.

Well, all that’s behind him, and as he returns with his second studio album, USEE4YOURSELF, he seems intent on a course correction. So how did he fare, this time out?

The album is undeniably more cohesive, with each track flowing so naturally into the next that you might hardly notice when you’re suddenly a third of the way through the LP, it’s so adept at getting you to kick back with your thoughts, letting the silky, layered beats carry you along.

Indeed, it’s certainly carefully constructed, with judicious use of its guests, all delightfully uncredited, allowing for a grin of surprise whenever a voice you particularly like pops in for a turn. Each selection is pointed, as if to prove just who IDK can hang with on a track, as well as illustrating the diversity of his talent, showing he’s as comfortable alongside an Offset or Young Thug as MF DOOM and Slick Rick.

As for the album, miles away from the obsessive focus of IWASVERYBAD, it’s a decidedly diverse affair, sliding comfortably between emotive moments of lucidity and chest-thumping braggadocio. That it all slots together so naturally speaks volumes as to IDK’s ability to shape a project.

It also balances quite a hefty emotional load: ultimately, this is music of optimism, but it’s heavily tempered by realism and IDK’s harsher experiences. Opener “3018091821” displays this perfectly without even a word, capturing the sound of a euphoric release as a man runs against a warm musical backdrop, only to be roughly cut short as he’s seemingly hit by a car.

From there it slides right into affairs, from the blunt “Dogs Don’t Lie” to the one, two punch of “PradadaBang” and “Shoot My Shot”, featuring Thug and Offset respectively, but even this is preamble for the ascent of “Red”, featuring the all star team of MF DOOM, Westside Gunn, Jay Electronica, and even a delightfully random Mike Jones on backing vocals. Needless to say, it’s a doozy of a track, even in spite of Electronica’s anti-vax assertions (sigh).

Nonetheless, even with that showstopping moment, the album’s undeniable centerpiece, both emotionally and narratively is “Hey Auntie”, which finds IDK momentarily fantasizing about an idyllic childhood, all before he confronts his molestation at the hands of a relative. It’s something he’s discussed in an interview before, but hearing an artist so known for his positivity and presence, especially in a genre known for discomfort with such realities, address it on record is bracing.

Even still, he pulls things back to a place of peace, reflecting on how his musical dreams have both come true and given his life stability, release, and comfort. It’s that bruised optimism that ultimately defines USEE4YOURSELF, and surely, that’s something we could all use just about now. It may not astound, but like a visit from an understanding friend, it’s nice to have to lean on.