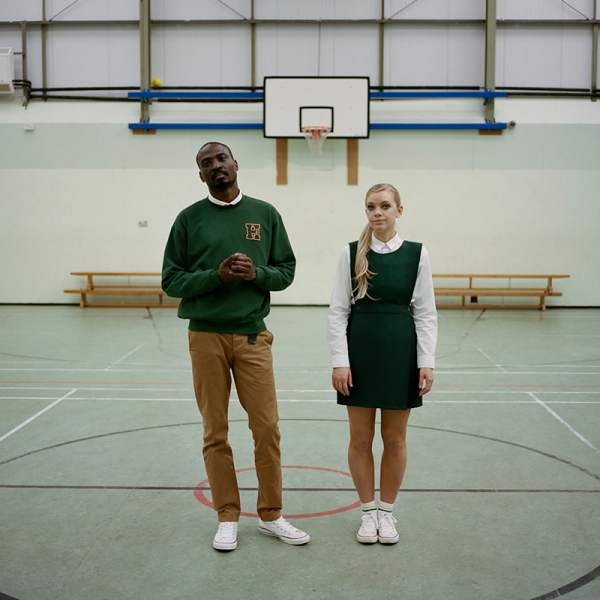 At the drop of Hugh’s debut single, “I Can’t Figure You Out” in 2014, the London synthpop quartet’s mix of enigmatic soul and exotic minimalism piqued curiosity of what an eventual long player may sound like.

Love, Hugh arrives encompassing their 2014 debut EP and a string of self-released singles issued over the past two years. Turns out, “I Can’t Figure You Out” remains the crown jewel of the LP, and no other track rivals or replicates its intoxicating intrigue. What Love, Hugh does portray is that the band wields considerable prowess in constructing inventive arrangements and their primary weapon lies in the full tonal spectrum of dual vocalists Joshua Idehen and Izzy Brooks.

Much of Love, Hugh uses ‘80s/’90s R&B as a blueprint, weaving in occasional wisps of dreampop, such as on the swirling opener, ”This Is How It Starts” and the drifting “I Don’t Like You”. This stylistic nod lends the album a sly coolness; while the kids swill cheap beer out of solo cups, flailing to club banger after banger on the brink of puking, Love, Hugh is the decidedly chiller next door neighbor. For good measure, though, “Go” manages to stand toe to toe with anything else out on the dancefloor.

Where Love, Hugh has any foibles is perhaps borne out of its road to inception. Save for a lull in the middle of its back half, the songs are uniformly strong, yet come across as exactly that – a succession of impressive songs rather than a cohesive album. Fortunately, Idehen’s baritone mixed with Brooks elastic croon provides a common thread throughout the album, exhibiting a keen ability to salvage the dry patches cropping up on occasion. However, the rhetorical spoken word segment from the back half of "In And Out Of Love” lands with a dud.

Love, Hugh reiterates that Hugh employ a deft hand in keeping a well-worn subgenre fresh. While this debut LP acts as a clearinghouse of pent up material as much as anything else, its songs are eminently gratifying and shines a light down a number of different paths down which Hugh can travel next time out.