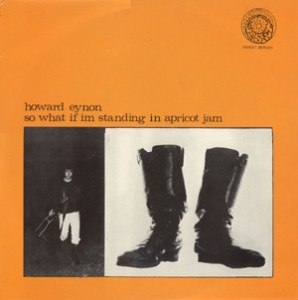 Howard Eynon’s So What If Im Standing In Apricot Jam is certainly an unorthodox choice for a 40 year anniversary reissue. By record label Earth Recording’s own admission, Eynon is a virtually unknown Anglo-Australian singer songwriter, so this re-marketing of his one and only record is more about bringing an almost lost-forever gem the widespread recognition it never got first time, than pulling on the nostalgic heart strings of continually loyal fans.

It is ranked amongst the rarest and most sought after acid folk private pressings, and listening to the album it’s definitely got the sense of a hidden gem that you could stumble across in the back of a dusty old record store, with it’s completely surreal lyrics, charming folky refrains and completely mad tales.

The rarity of the record is almost just one piece of the jigsaw of Eynon’s bizarre life story; born in Cambridgeshire, but his family left the English countryside when he was eleven to move to rural Tasmania, where he grew up on a dairy farm ‘milking cows, driving tractors, riding horses and blowing up tree stumps with gelignite and would often spend days on end in the bush without seeing another living soul.’

At 17 he left the farm on his motorcycle and made his way to Melbourne to pursue a career in acting. He worked mostly in theatre and joined various theatrical repertory companies. He found himself in all kinds of small parts for local Aussie dramas such as The Sullivans. Later, he made notable small appearances in both the original Mad Max (1979) and as one of the horse riders in The Man from Snowy River (1982).

His interest in acting and theatre comes through on the record. You can imagine his live performances to be less of a straight music gig and more of a surreal spoken word or musical comedy performance. Whilst the musicianship is clearly accomplished, and some nice psychedelic touches of mellotron, synths, string and brass help to give this record some of its undeniable charm, the songwriting is too heavy on quirky lyrics and too light on strong riffs and melodies to make it really live up to the claim that Eynon is a lesser known Syd Barret, Neil Innes or Nick Drake.

Nonetheless, there are some standout tracks on the record, such as the discordant "Commitment to the Band" or the delightfully wistful "Happy Song". Sometimes, though the melodies or styles seem too closely borrowed from perhaps more celebrated artists of the day, such as ‘Now’s The Time’ which sounds like an almost direct copy of Ralph McTell’s ‘Streets of London’. In "Hot BJ" he does allude to his similarity to Donovan - “if you want to be critical and say this sounds a bit like Donovan, I won’t change it” - suggesting that he was well aware that his style wasn’t entirely original.

Overall, this is a forgotten gem that gives an interesting insight into the folk scene of the era, and it’s nice to pay attention to a lesser celebrated artist, and Eynon is worthy of the cult status he’s achieved, but it seems right that he’s standing in the shadows of some of his better known peers and not in the spotlight alongside them.