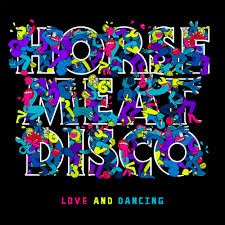 After a couple of standalone singles, Luke Solomon, A&R for the UK's best house label Defected Records became aware of other bits and pieces, and pushed them to focus on completing them. The result, Love And Dancing isn’t a cut and paste disco sample slapped onto a house track as many tend to do, it’s the pure essence of all aspects of disco while reaching out to genres it influenced, distilled into long playing form. Whether it’s Philly Soul, swooning Ashford & Simpson soul, post-punk's flirtation with the dancefloor, poppers drenched sleaze or cheeky disco-pop it’s all here.

It’s an album which plays out as the preparation before hitting the club, dancing through the night to the inevitable end. Of course, there are disco bangers, Amy Douglas, sets the scene on slick opener "Let’s Go Dancing" as she declares "I’m feelin’ good/let’s go dancing tonight” over nagging guitar riffs lifted from Nile Rogers and salsa piano chords, it's an evocative statement of intent. The soaring strings of "Falling Deep in Love" featuring the unmistakable voice of Kathy Sledge is a modern-day "Freak Out", while the sensation of a killer disco track is broken down on the early evening vibes of "I’m You Dancing" Annette Brown stating “I’m the flashing lights, I'm the endless nights, I'm the horns and strings, I'm the diva who sings” over parping horns and a slinky booty shaking bassline.

They’re not afraid to take the disco template and fuck with the formula and the album really excels when it creeps toward the darker side. The prowling of’ "Self Control" featuring the sultry groans of Xavier & Roy INC is a rush of potential danger and dry ice in a kind of Rick James B-side remixed by DFA way, "Sanctuary" taps into the post punk sounds of ESG, with vocals by The Phenomenal Handclap band adding a deliciously ice-cold nonchalance, while "Burn" takes the seediness of Soft Cell, adds Gang Of Four sloganeering and space disco synths resulting in a brilliant new-romantic curveball.

Elsewhere, upfront nineties house ("Fight For Love" featuring Brand New Heavies diva N’Dea Davenport) sits comfortably alongside two more excellent Amy Douglas cuts. "Message To the People" is a swooning piece of uplift, while ‘Spacebound’ ventures to the periphery of disco as it looks to the weirdo amyl drenched HI-Nrg sounds of Patrick Cowley and Tantra, the dramatic horn synth stabs and bizarre Sci-fi noises provide the albums ultimate moment of jittery altered state dancefloor delirium. Nrg is also referenced on the coldwave synths and arpeggiated basslines of ‘"Give Me All Your Love", the fizzing high-point of the album featuring a sumptuous vocal by Fiorious, it’s a masterful channeling of past disco high points achieved by Donna Summer & Giorgio Moroder collabs, and the ultimate queen of disco, Sylvester.

With the four Horse Music Disco Djs coming from such disparate angles of disco a clash of styles was a possibility, but Love And Dancing makes easy work of such a problem while achieving the feat of creating an album which can be listened to at home or in the club, respecting the past while avoiding the retrograde with aplomb. Your disco needs them.