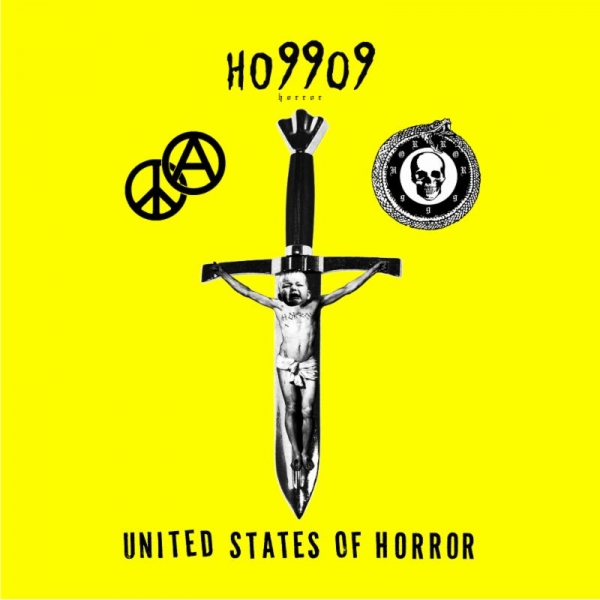 LA-based punk/hip-hop hybrid Ho99o9 have always made a point of producing confrontational output.

Having spent the best part of four years gradually building their reputation on having their live shown shut down but the cops, and music videos involving roadkill and gunshot wounds, the duo have finally decided to release their long overdue debut album.

Given that the looming global backdrop to this, especially in the developing era of a Donald Trump presidency in their home country, is one of political uncertainty, rampant protectionism, fractious isolationism and racial tension, the timing couldn’t be more pertinent. It’s almost as if Ho99o9 have waited for the world to begin to fall apart before releasing their full statement of intent.

The album’s title United States of Horror hardly needs any qualifying and sets the stage for the band’s musical rhetoric of disenfranchisement in modern America. And Ho99o9 waste no time in delivering the onslaught. “War Is Hell” rushes with a nefarious spirit of political anxiety like a futuristic horror movie as the lyrics “We’re living on the edge of your government / So plan escape / I went and killed your pastor in wet dreams / This evil shit” are delivered through visceral rasp of tangible aggression.

Ho99o9 have always maintained their aesthetics are heavily influenced by old school punk, and at points on the album this is proved to be indisputable. “Street Power” and “City Rejects” fire off relentless series of guitar silos in a hardcore thrash-punk spirit. But this is delivered through Ho99o9’s prism of politically charged ire and a mile-high wall of compressed distortion. It’s like listening to Bad Brains through a broken television.

But where Ho99o9 work best is when they’re firmly in the realms of confrontational sonic maximalism. “Bleed War”, “Dekay” and the album’s title track deploy levels of amped-up aggression and gnarled, chopped and screwed samples that make HEALTH sound like a Katy Perry backing track.

“Moneymachine” and “Splash” see Ho99o9 turn down their collective heat as the tracks slither with elongated beats and vocal loops delivered through a thick haze of west coast progressive, trap-infused hip-hop. They’re welcome moments of respite between the riots at either end of the album.

The eclecticism of United States of Horror feels like an act of pure catharsis, and for a band that clearly prides itself on keeping people guessing, this makes perfect sense. But this also leads to the album feeling a little disjointed, and plunging the listener into pools of thrash-punk before dunking them head first into trap-rap and skit-style interludes doesn’t always pay off.

But that doesn’t really matter because, ultimately, United States of Horror is more than just a collection of songs. It’s exactly what Ho99o9 intended it to be: a blistering manifesto for a disenfranchised America.