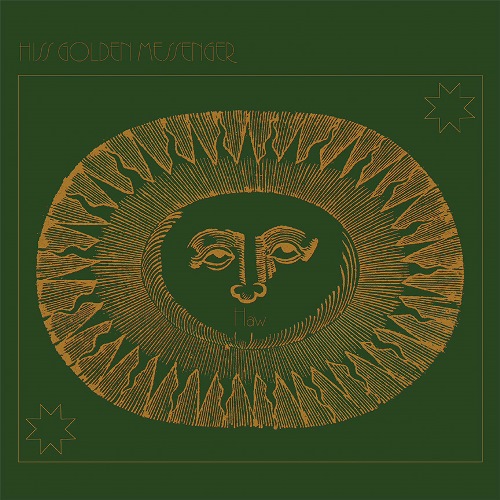 If the success of songwriters can be measured by their ability to create a world in song that is theirs and theirs alone, Haw marks the point where singer/guitarist M.C. Taylor – alongside multi-instrumentalist Scott Hirsch, the mainstay of the Hiss Golden Messenger collective – has well and truly arrived.

It would be a mistake to focus too much on the songwriting: the fourth HGM studio album is a team effort. By this point, Hiss Golden Messenger is a genuine band, albeit one with loose parameters. The spotlight is shared: erstwhile Lambchop member William Tyler’s twang-fuelled telecaster is the star turn of opener ‘Red Rose Nantahala’, whilst Hirsch contributes the spooked-up instrumental ‘Hat of Rain’. Elsewhere, members of Bowerbirds, Megafaun and Black Twig Pickers also pop in. However, it’s hard to tear your attention away from songs as evocative, imaginative, multi-faceted and uniquely pitched as the stuff Haw is made of.

Haw is in many ways similar to its excellent predecessor, 2011′s Poor Moon. The musical touchstones – mainly the moment in the late ’60s/early ’70s when the country and the city collided, producing a belatedly raved-about style known as country-funk – are still here. This time around, however, the influences are mashed together more thoroughly, creating a uniquely rich stew where country, soul, rock ‘n’ roll, gospel, folk and more exotic influences mingle freely. Lyrically, Poor Moon‘s glimpses of gritty realism – reminiscent of Richmond Fontaine’s Willy Vlautin – are gone, replaced by mysterious dispatches from unknown locations somewhere between the here-and-now and the distant, imaginary past. As reality becomes submerged by myth, the listener is left to decide what the songs really stand for. There’s no self-conscious obscurantism at play here, though: Taylor’s focus is on storytelling, it’s just that these are stories that don’t lend themselves to easy answers.

On the likes of ‘I’ve Got a Name for the Newborn Child’ and brilliantly named ‘The Serpent is Kind (Compared to Man)’ (both of which interrupt their country-picking proceedings to deliver choruses as lovely and fresh as the first beam of sun breaking through ominous rainclouds), lives are hard and times are hard, but a belief in basic decency and hope for something better around the corner are made of sturdier stuff than despair. In the former, reasons for faith and resilience are found in new life (“Goodbye blackened abattoir/Hello yellow dawn”); the latter refuses to be disheartened by the beastliness of man: “Let the rain come on… behind it burns the sun”. Next to these remarkable tunes that accept the gloom but won’t bow down to it, the fatalistic surrender of ‘Devotion’ – imagine vintage Van Morrison slowed down to the pace of a teardrop sliding down a cheek – becomes even more startling.

Elsewhere, ‘Sufferer (Love My Conqueror)”s spiritually charged snapshot of oppression and defiance is infused with a near-biblical sternness, deliciously juxtaposed with the track’s robustly skanking, Stax-meets-Studio One country-funky-Kingston hybrid, with a drop of Middle Eastern-hued strings chucked in for added oomph. ‘Busted Note’ – a deceptively simple ode to the ceaseless procession of human misery and the consequent call for solace and salvation - seems to time-hop between the ancient walls of Jericho and the backroom of some bourbon-marinated rock ‘n’ roll dive. It’s startling stuff, but if that sort of analysis of the song’s layers and possibilities doesn’t appeal, you could just groove to the gospel-touched chorus (which, thrillingly, appears to reference roots reggae legends’ The Congos’ seminal ‘Fisherman‘) that the track’s The Band-esque stomp blooms into.

Such air of mystery, malleability to individualised interpretations, and the ability to respect the traditions without bothering to adhere to their predictabilities is where much of Haw‘s power lies. “I know the light… you can’t own the light”, states the would-be folk standard ‘What Will Be (Will Be Enough)’, stark enough to fit right in on 2010′s solo set Bad Debt. If we assume that this light refers to inspiration, Taylor and co. have not only located it but also signed the deed to its brightly burning bulb.