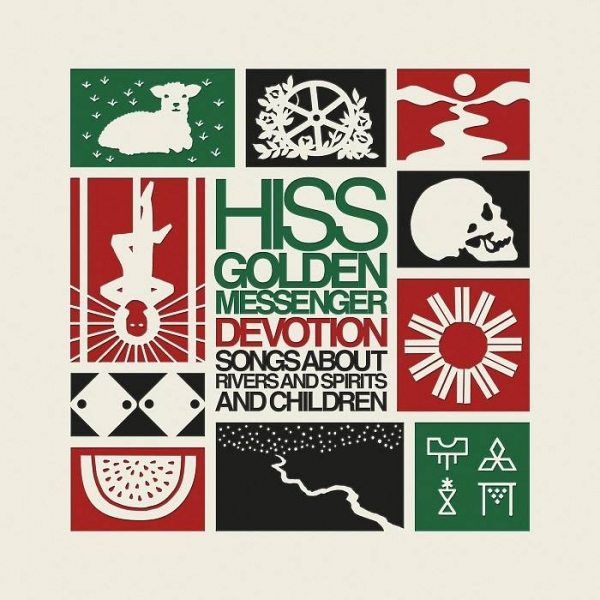 ‘‘It’s hard to tell how the hell to get another chance’‘, goes one typically end-of-its-tether line in “Super Blue (Two Days Clean)”, one of the many standouts on Devotion.

One way to contextualise the contents of this luxurious 4-CD/LP box is that it details how MC Taylor - the Durham, North Carolina-based songwriter at the helm of the Hiss Golden Messenger collective - was given (and grabbed) a second shot of making a living out of music.

The first of the three formative Hiss Golden Messenger albums reissued and repackaged on Devotion, 2010's Bad Debt, is the sound of a songwriter seeking to impress only himself, having tried and failed to reach an audience by trying to second-guess what the listeners might want to hear. Recorded late at night on a basic tape recorder at a kitchen table whilst Taylor's infant son was dozing next door, the crude production values of this stark solo set certainly highlight where the 'hiss' part of Taylor's songwriting alter ago derives from; next to this rough presentation, Nebraska sounds like a lushly opulent opus for a full orchestra and a choir.

But it doesn't matter. By stripping his presentation to its very basics and forgoing any impulse to please anyone outside of the solitary room where the songs were performed, Taylor discovered his unique voice. Whereas the material of Taylor's previous band The Court & Spark never quite managed to shake off the suggestion of inferior offshoots of past masters of widescreen American music, these mysterious and haunting songs - rooted in the soil and familial bounds of the North Carolina community Taylor had uprooted for from his native California, and full of sepia-tinged memories, bourbon-soaked nightmares, troubled minds and troubled times, beasts forever snapping at your heels whilst you're trying to stay upright, as well as the tantalising if at times remote hint of salvation and light - continue to sound like no one else, now or then.

As you'd predict for an almost confrontationally intimate, self-released record, few were paying attention at the time. However, even a few listeners were more than Taylor had dared to hope for, and the album’s ample promise led to its follow-up being released by New York’s veritable folk/roots label Tompkins Square. Almost indecently rich in detail next to its bare-bones predecessor, 2012's vibrantly galloping Poor Moon must rank as the foremost recent masterpiece of what's loosely termed the Americana genre.

It starts off strong with the haunting yet hopeful "Blue Country Mystic" - as effective a description of Taylor's songwriting style as any - and gets deeper and more resonant with each track, culminating with the weary and impossibly moving prayer of "Balthazar's Song", one of the tracks here that are expanded on (and virtually unrecognisable) from the solo takes on Bad Debt.

Clearly relishing the chance to bring his newly discovered songwriting prowess to full fruition with a band, the reference points take in murky, J.J. Cale- and The Band-esque country-funk, soul-hued balladry, vintage singer-songwriterly introspection, American folk and roots music, classic '70s FM rock, gospel and dub. Sometimes all at the same time: witness how the bruised and battered groove of "Jesus Shot Me in the Head" - a majestic account of a dedicated waster's salvation and/or doom following celestial visions - dissolves into what sounds like a ghostly Appalachian string band raising from the swamp mist.

Released by the peerless Paradise of Bachelors (home to such kindred spirits as The Weather Station and Michael Chapman), 2013's Haw followed along the same tracks in its ability to tip its hat to past templates of American music whilst sounding forever fresh and its dedication to juxtapose troubled and downcast themes with bright and robust musical settings. For evidence, see how the dark ruminations of "The Serpent is Kind Compared to Man" is tethered into a sparkly country-folk hoedown, or how the biblical allegory "Busted Note" blooms into a swinging chorus that seems to channel The Congos' roots reggae classic "Fisherman". Yet Taylor was evolving, too. The masterful, beaten yet defiantly unbowed "Sufferer (Love Thy Conqueror)" with its Middle Eastern (hints of Led Zeppelin’s "Kashmir"?) strings aside, the songs here steer gently away from the old testament language of Taylor's earlier output, honing in instead on the bittersweet pressures of balancing a hard-won modest popularity as a musician with the responsibilities of family on tracks such as the slow-burning hymn "Devotion" (whiffs of prime Van Morrison, perhaps) and the warmly jubilant "I've Got a Name for the Newborn Child".

These are themes that Taylor has continued to explore on his three subsequent albums for Merge Records, most recently last year's soulful, roots-y Hallelujah Anyhow, whilst also continuing to build on the sweaty groove of Haw opener "Red Rose Nantahala" in order to pitch Hiss Golden Messenger as an act who never fail to understand the crucial importance of the groove. The albums included on Devotion prove that Taylor's current standing as the one contemporary ‘classicist’ songwriter who actually deserves to be ranked alongside his vintage inspirations has been there from the start. Devotion also suggests that once the forever prolific Taylor discovered his songwriting mojo, the tap has rarely been turned off: the rarities and off-cuts compilation Virgo Fool sounds impossibly compelling for a collection of leftovers, with the haunting "Issa" - for example – scaling such hypnotic heights it could only have been left off an album due to an admin error.

“What Shall Be (Shall Be Enough) “, states the title of Haw’s closer, one of the tracks here that sounds like it's been in circulation forever, just waiting to be plucked from the ether by a songwriter tuned to the right frequency. It’s this mindset - making music for its own sake, with no expectations or compromises – that has allowed Hiss Golden Messenger to bloom into what is possibly the most consistently compelling songwriting operation in existence. Devotion offers the essential first chapter of their ongoing story.