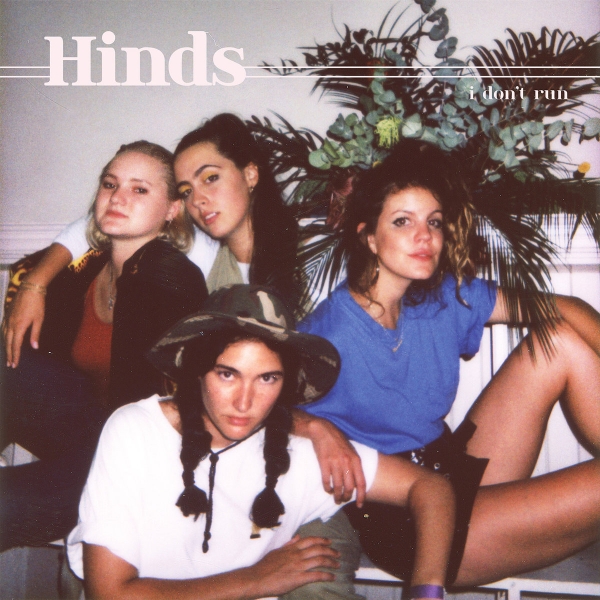 There’s an old adage about the making of the record being the hard work and the touring of it being the reward, and it certainly seemed to hold true in the case of Hinds’ debut album.

After the Madrid four-piece released Leave Me Alone in January of 2016 - by which point they’d already spent a fair bit of time on the road in the lead-up to it - they jumped back in the van and played exhaustively around the world for the rest of the year. Social media allows individuals and bands alike to paint misleading pictures of themselves but plenty of sources can corroborate that the image Hinds gave off throughout that tour was entirely accurate - that, despite the long drives, sleep deprivation and bottomless well of beer, they constantly had a smile on their faces and were quite evidently having the time of their lives. Their shows, without exception, felt like rock and roll parties, and you can imagine plenty of their contemporaries having the same reaction, watching on, as they would to the likes of Mac DeMarco - how come they’re having such a laugh all the time?

Of course, like DeMarco, Hinds have down to a tee that air of the kid at school who made out they were too cool to do any work before mysteriously coming up trumps with top marks when the exam results came out. Anybody who listened to Leave Me Alone would know that one, it came off as a real labour of love beneath all the ramshackle charm and two, that its songs were frequently scored through with heartbreak and palpable angst, regardless of how carefree the melodies might have sounded. There was a genuine, and considerable, emotional heft to the album and there seemed to exist a real alchemy in the songwriting partnership between back-and-forth singers Ana Perrote and Carlotta Cosials - a way of weaving in and out of each other’s mindsets every bit as deftly as they did their guitar lines.

Between the relentless road schedule and the quiet craft of their last record, then, you could’ve been forgiven for greeting the news that a second LP would be arriving a little over two years since the last one with surprise and a touch of concern; would they really have been able to knock out a worthy follow-up with such a quick turnaround? They certainly didn’t have time to reinvent the wheel; I Don’t Run is cut from precisely the same musical cloth as Leave Me Alone, all languid vocal takes, chirpy lo-fi guitars and scratchy production. The overall feel of it, though, is different, and sounds every inch the work of a band who came off the road not worn out and ready for a break, but itching to dive back into writing whilst the engine was still running.

The poppier tracks are hookier than last time out, the melodies more vibrant, particularly on lead single “New for You” and the freewheeling “Rookie”. The album’s quieter side, meanwhile, now wears the look of the sort of lovelorn, woozy comedown that DeMarco is so good at; “Soberland” equates kicking bad habits with shelving toxic relationships in softly devastating fashion, “Linda” aches with quiet desperation, and on the standout “I Feel Cold But I Feel More”, you come to realise that so much time spent divorced from the real world on tour hasn’t dulled Perrote and Cosials’ emotional focus - instead, it’s heightened it.

There’s the odd moment where the band are caught with one foot still in the Leave Me Alone era; the riff on “To the Morning Light” could have been lifted straight from “San Diego”, for instance - and fresh ideas are few and far between, which is a little bit of a shame when, as a case in point, the thumping looped drums on “Finally Floating” help to make it such a highlight. But what I Don’t Run does do is that it takes the already colourful palette that the group used for Leave Me Alone and expands on every aspect of it, imbuing it with the sort of fizz and crackle that you can’t fake - it’s only ever the product of a thriving live outfit. Hinds are approaching full bloom.