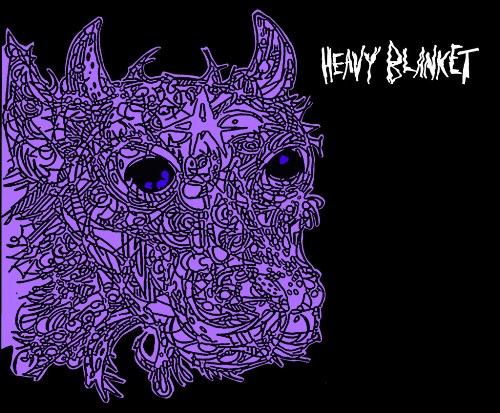 J Mascis, erstwhile leader of the ever wonderful Dinosaur Jr, he of the long silver locks, he of the stoner mumble persona and the unending rack of effects pedals is a songwriter who will probably always have a place as an alt-rock icon – a kind of whacked out guitar savant who’s always gone his his own way and, hey man, it’s cool if ya wanna follow. In short, he’s something of a legend and, maybe as a result of that kudos he’s now drifted – one prays briefly – into Do Whatever The Hell You Like territory. While this six tracker of low slung smashed, caned blues riffers may have an appeal – one feels mostly to Mascis himself – it’s a far cry from the glorious melodic sludge he makes at the day job.

To make up for the lack of content in the actual record – it really is just J soloing over a variety of sub-Zep riffs for half an hour – there’s a neat and funny back story to go with it that casts Mascis as a former member of high school band Heavy Blanket, now reunited after decades in the wilderness with his old bandmates Johnny Pancake and Pete Cougar. There’s tell of drownings, of brain damage, of Eddie Vedder-fronted conspiracies and dead grandmothers that only hints at the volume of drugs ingested while concocting such a tale and, more importantly, the amount of weed sucked down prior to these recording sessions.

The closest the album gets to the level of invention shown by their press team is the Minutemen-style aggression of the opening moments of ‘Dr Marten’s Blues’ – all slam happy bass and driving rhythm – but this, of course, drops into endless shredding within seconds. Because that’s what all of these tracks do.

Sometimes, as on ‘Corpuscle Through Time’, there’s no potential to be lost – you immediately know where you stand. Which is to say in a muddy field with some incomprehensible classic rock hippies. The more you hear the intro chug of ‘Spit in the Eye’ the more it’ll make you think of Deep Purple and their ilk, yet shorn of tune, intention and brevity. It’s barely listenable at these junctures.

You can see something like opener ‘Galloping Toward The Unknown’ going down well in a live setting with every control set to eleven, every head nodding in admiration of Mascis’ dexterity and of the solid groove of the rhythm section. But, as you’ll note we’re using words like “solid groove” which are of course some indication of one grasping desperately for positives.

So yes, it’s stoner rock. Really really stoned instrumental stoner rock that perhaps with the right level of intoxication you could find as wild, textured and eccentric as the press story that accompanies it. However if you’re coming to this dry and expecting anything more than a few takes of fuckabout jamming and indulgence you’ll be sorely disappointed. Mascis’ well-earned legend has always been dependent on a foil like longtime Jr drummer Murph to rein in his more flailing Neil Youngisms. Without that to ground him a superb talent simply stumbles stoned around the rhythm, fretwanking all the way.