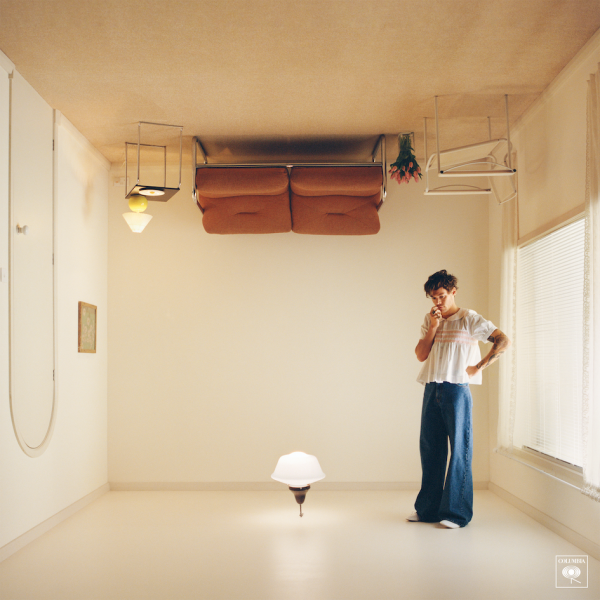 Who is Harry Styles when he’s at home? His third album swaps number one shoo-ins for more playful experiments, and reveals an artist whose biggest concern is simply to have a good time.

At this point, it pretty much goes without saying that any new album, by any artist, was born from a period of pandemic-prescribed navel gazing. Of course it was. But for a globe-trotting giant who hasn’t stepped off the hamster wheel since his first musical tribute to Stevie Wonder at sixteen, the emergency brake must have been especially jarring. “You’re no good alone,” Harry Styles seems to have concluded from his time away, gently reminding himself, and us, on the second verse of his hit return single “As It Was.”

The track (and indeed Harry's House as a whole) struggles with the passing of time and learning to accept all the change that brings – a treatment of metamorphosis to reconcile his earlier admission, on “Late Night Talking”, that he’s “never been a fan of change.” It’s perhaps a surprising revelation from Styles, who, musically at least, has long appeared to chase reinvention: he shed the long hair of his boyband days for the angsty soft rock of his self-titled debut, before donning sequins and a feather boa for Fine Line’s technicolour production. With each album, and every era to surround them, it’s felt as though Styles has allowed us to enter further into his life and into his world. Now, it seems, we’ve finally made it home.

From the moment Styles’ voice breaks over “Music For A Sushi Restaurant”’s opening synths, the glee in this record is palpable. It threads itself through the electronic production of “Daylight” and the groovy “Cinema”, before bringing the boa back out for the trumpets of “Late Night Talking” and “Daydreaming”. They’re songs about love and relationships, but not in the ‘hot girl admired from afar’ formula that he’s previously perfected. Lyrically, he’s more apologetic now, self-conscious: afraid of being overbearing on “Little Freak” and too clingy on “Satellite”. It’s quite comforting, really, to hear even a global icon sing “you got a new life / am I bothering you?” Elsewhere, “Matilda” and “Boyfriends” set heartfelt laments to guitars that wouldn’t have been out of place on Styles’ debut – “Matilda” is a particular standout, with an ode to chosen family that makes for some of the strongest writing on the album.

Other moments do fall flat: rather than joining the fruit bowl of bangers alongside “Kiwi” and “Watermelon Sugar”, “Grapejuice” lends itself more to being actual background music in a restaurant; at the album’s tail end, the drums on “Satellite” tease a depth that’s never quite reached, and the upfront “Love Of My Life” presents a charming if mildly underwhelming finale. None of these things are exactly heinous, though. Rather, they are the natural product of an album made in the pursuit of joy.

Styles could sell out any stadium he liked, as many times as he liked; ‘winning people over’ can be struck quite firmly from his ‘to do’ list. Having learnt and accepted that, it feels as though he has finally relaxed. What’s more, the pandemic allowed him to live not as Harry Styles: one of the most famous and well-loved celebrities on the planet, but as Harry Styles: the nice, twenty-something guy from Holmes Chapel. The result is an album written for the sake of having fun rather than guaranteeing a commercial triumph – though it could well achieve both. At times it’s experimental, at times it’s hearteningly delicate, and there’s enough retro nods thrown in for you to keep the platform heels and oversized sunnies you bought for Love on Tour.

Harry’s House is a good album because it doesn’t care if you think so. It's not trying to appease the male critics chained to the altar of classic rock, and it isn’t showering you in glitter and hauling you onto the dance floor (even though you are still cordially invited). Harry’s house is open; whether you choose to come in is up to you.