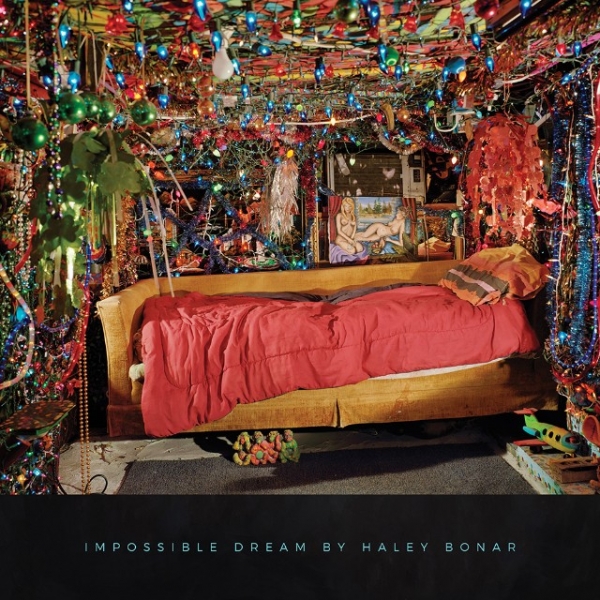 A music veteran now of 15 years, every minute of that decade and a half for Haley Bonar has been work, building upon early self-releases, positive local press, and fortuitous opening slots for local Minnesota indie rock stalwarts Low.

It’s ironic, then, with respect to Bonar’s own career now that her latest offering is titled Impossible Dream, given that the evolution begun with moving from straight ahead folk to the brawnier indie rock of 2014’s The Last War comes to its heady and full fruition here.  The Last War was indeed a surprise to those following Bonar to that point and as confident as she sounded pulling such an about face off then, Impossible Dream makes its predecessor seem downright tentative.

With nary a crack across the entire album, Bonar’s weaving of multiple indie rock subgenres – alt-country, dream pop, punk – is tight as it gets, yet she and her band consistently retain an air of restlessness across the album, due largely in part to the opposing and symbiotic relationship between Bonar’s light and clear vocals and the propulsive rhythm section.  At times, she has to fight to keep atop her accompaniment, such as on the insistent “Stupid Face”, and that fight injects the proceedings with a vital sense of urgency.

With a shrewd narrative knack, Bonar hits on a number of significant sociological topics such as teenage parenthood, homophobic hazing, and broken home family life throughout Impossible Dream, whose real or implied protagonists claw and scrape toward the album’s namesake.  Owing a certain debt to Neko Case’s noir-stained and frankensteined alt-country, while Bonar's vocals lack Case's inimitable power, it's hardly a dearth but, instead, lends her words a crucial sense of relatability in discussing such intimate subject matters.

On standout track “Skynz”, Bonar cautions that those who write history – those who spend their time focusing on others’ pasts – “don’t understand the price we pay to be complacent”.  Certainly Bonar has heeded her own words well; Impossible Dream has her charging forward, head full of steam, and if her dream had seemed impossible heretofore, it’s here now looming bright above today’s horizon.