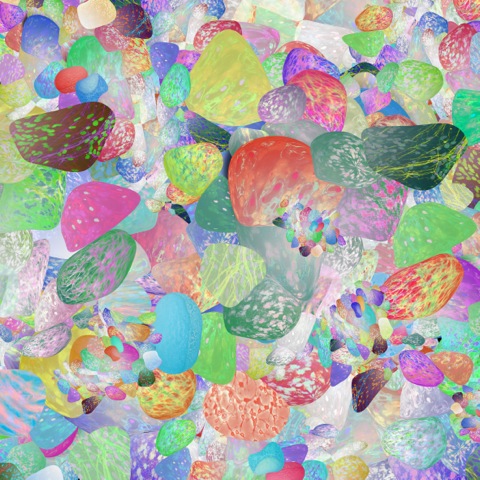 If your last exposure to Grumbling Fur was through debut Furrier, the streamlined collisions of glittering electronic pulses and pastoral acoustic meditations that fuel this album - their third, and the follow-up to last year’s much-acclaimed (The Quietus’ album of the year, no less) Glynnaestra - might come as a bit of a surprise.

Far, far more interesting that your average piece of spontaneous randomness, that 2011 debut was a bleary-eyed noodle-fest of drones, clatter and hiss - but many spots of beauty, too, cooked up in a one-day session by an all-star line-up featuring such odd-rock luminaries as Circle/Pharoah Overlord mastermind Jussi Lehtisalo. On Preternaturals, the band’s downsized to a core duo of Daniel O’Sullivan (also part of Sunn 0))) and Ulver, amongst myriad other noise-friendly projects) and Alexander Tucker. The music follows a similar less-is-more ethos.

To describe the outcomes as more mature than the band’s improvisational roots evokes a worrying whiff of uneventful predictability, so let’s call it evolved instead. If Furrier was a mad troll trekking through enchanted woods after nightfall, munching on dubious herbs and roots along the way, Preternaturals finds the wanderer having hit the pavement, swapping a ratty cover of leafs and twigs for actual clothes and getting a shave and trim without abandoning that original taste for mind-expansion and sensory overloads entirely. For evidence, check the few brief abstractions scattered here amongst the more conventional songs: the unnerving, disembodied mutterings of “White China Pencil” in particular does the polar opposite of outstaying its welcome.

Although big on melody, Preternaturals isn’t about to roll on its back and expose its belly for a scratch straight away: you’ll have to put in a bit of effort to get to the full riches hidden here. Apart from the immediacy of the (comparatively speaking) propulsive, sleek, subtly melancholy first single “All The Rays”, most of the cuts unfurl unhurriedly like drifting clouds on a calm day. Patience pays plentiful dividends: there’s a whole heap of arresting detail scattered here to render deceptively low-key numbers into compelling combinations of pop and psychedelia. The likes of the minimalistic “Lightinsisters” – a hypnotic slice of time travel, the controls set on the proto-electro scene of early 70’s Dusseldorf - and the languid “Mister Skeleton” might seem uneventful at first, but further listens allow the songs to dig in their claws: the blue moods and expansive refrain of the latter in particular cultivates almost anthemic qualities without really seeming to try very hard at all. Elsewhere, the string-soaked folk-raga of “Feet of Clay” harks back to Tucker’s past form as a leading UK practitioner of the so-called freak-folk (check out 2006’s solo highpoint Furrowed Brow). The restlessly fidgeting closer “Pluriforms” could almost pass for the stadium-slaying electro-blues of Depeche Mode in their pomp, were the machines not joined by eerily chopped and twisted flutes and disturbing voices that seem to recite some strange pagan ceremony, resulting in a cut that has one smartly-shod foot in a pristine high-tech laboratory whilst the other, bare trotter shivers in the cold mud of the woodlands long after dark. Which is a pretty good summary of this beguiling, all-too-brief album as a whole.