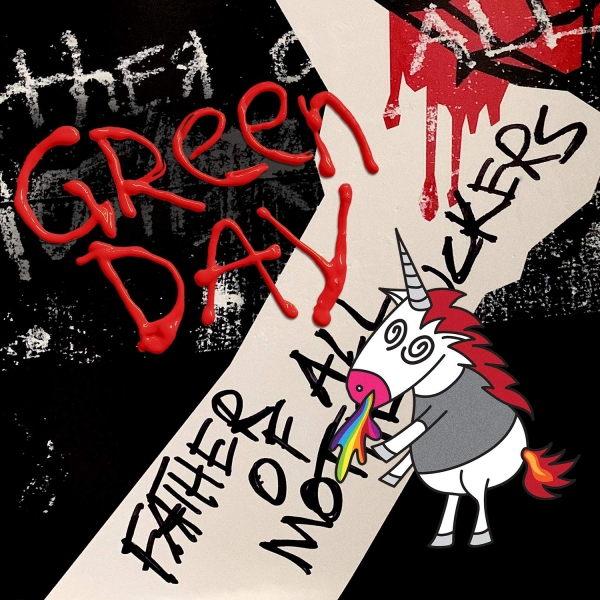 Ever since Green Day shot to their dizzying, stadium-filling, rock-opera penning heights with American Idiot it’s felt like they’ve been adrift at sea. A band who’ve gone from plucky San Fran upstarts scrapping their way from the punk community, where can they go once they’re ping-ponging around the top with no more mountains to conquer?

In the last decade, they've tried to reconstruct themselves through triple-part albums, side projects, monikers and mining back into what got them here in the first place, which leads us to Father of All Motherfuckers.

Given it's their thirteenth album, the scope of room for them to play with has decreased significantly since expectations will always be high. And on Father... - if the title doesn't give it away - that's all cast aside, as Green Day clamber at the light-hearted side of life.

Fun is what Green Day are after. They’ve done their serious albums, had the teen years nailed, but now it’s time to grow old and channel some plucky energy that makes you want to keep on living.

Which they do to be fair. It's hip-swinging, and rockabilly central ("Meet Me On The Roof", "Stab You In The Heart"). 2020s Green Day defy expectations. Defiant of what everyone wants them to be, but still charging forward with the same youthful exuberance that is clearly rattling around inside Billie Joe Armstrong and co. "I Was A Teenage Teenager" laments the times of being "full of piss and vinegar" via a by-numbers plopping-punk jam that turns it into an anthem for the middle-aged dreamers.

All told, there's serious heart here. The question of if this is where Green Day should be heading (answer - yes) is overshadowed by the supremely questionable, to a point unnecessary, use of a sample that really could've been amended even after they've addressed it.

Father... is an album made to be forgotten like those nights that initially held no promise but ended up running away with you till you wake up. It's good for a dance, a burst of energy in the waking hours, but at some point, you'll try to reflect on it in years to comes, and it just won't measure up. It's clear what they've wanted to do, and in some aspects have nailed it head-on, but to execute this properly, there needs to be more focus on wrapping that pure-as-fuck punk heart that beats in their chests in something more than a cartoon unicorn.