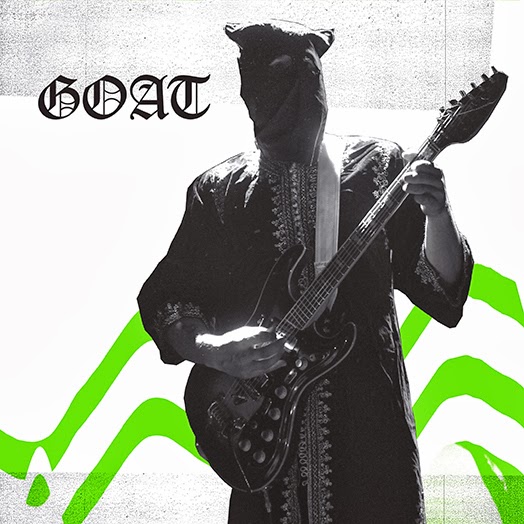 Although creativity is much valued and make-believe has played a part in the foundation myths of many top-ranking artists, serious-minded music scholars insist that a band’s freedom to indulge their imaginations must be constrained by a proven link to the source materials. If you play the blues, you must have suffered; if you use elements of West African music traditions, you must have studied at the feet of a griot. As suggested by last year’s debut World Music and proven by Live Ballroom Ritual, Goat are obsessed by both of the above and much more besides, but they are far too busy in their search of the ultimate Fela Kuti-meets-Fun House workout to display respectful reverence for their inspirations. As such, they are built to set off the purists’ authenticity breach alarm.

Although now based in the considerably less exotic Gothenburg, the ever-evolving outfit’s core trio originate from of Korpilombolo in the Swedish part of Lapland. The legend has it that a particularly virulent curse was slapped on the small village’s residents due to their penchant for witchcraft and false idols (a golden goat, by any chance?). When their descendants started a band several decades later, this dark stuff seeped deep into every note they produced. The raw, unflinchingly ‘real’ racket captured here supports this most towering of all tall tales: this potent stuff is custom-made to whip folks involved in some ungodly ritual into a hallucinatory frenzy.

Some might question of wisdom of releasing a live album so soon: after all, the 12 tracks here cover Goat’s entire recorded output to date. However, this unpolished, strictly verite document of the band’s celebrated show at the Electric Ballroom in London in June 2013 isn’t a mere stopgap release whilst the band await inspiration for brand new material. Compelling as World Music and this year’s double A-side single “Stonegoat”/”Dreambuilding” were, it felt like the band were hitting the stop button too soon in order to contain their jams within the conventions of ‘rock’ song duration. Here, Goat let their grooves sprawl out freely, with frequently explosive outcomes: just check out the dub-hued percussion fest at the core of “Run to Your Mama” or the sizzling battle that rages between a honking sax and dueling guitars on “Let It Bleed”.

Live Ballroom Ritual, then, is a rare example of a genuinely essential live album, a snapshot of a band conjuring a collective hypnosis via a sustained groove, with each cut, from the opening instrumental “Diarabi” (echoes of Grails’s desert sand-blasted Burning off Impurities) to the superb guitar-off that closes “The Sun The Moon” (with one guitarist channeling the minimalist afro-funk of Africa 70, whilst the other summons the wah wah-washed spirit of Hendrix) adding to the gradually building momentum. On this evidence, Goat really should don their outlandish alien witchdoctor stage outfits, which handily add to the band’s mystery by disguising the identity of the musicians involved, much more often.