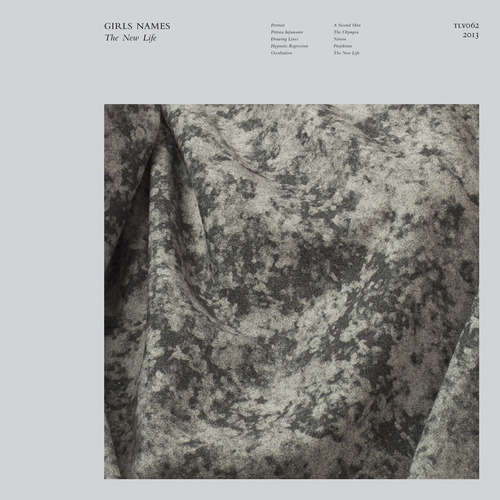 What on earth happened to this lot? Just a few short years ago, Girls Names were Belfast’s finest purveyors of cheerily shonky noisepop; all fizzy guitar lines, playfully dexterous rhythms and easy melodies.

The sort of thing that helps the time pass more enjoyably when waiting for a bus on a warm summer’s day, or else crops up unexpectedly during an iPod shuffle session and reminds you that you really must give the whole thing another go, or even makes you wonder where you left those Wavves 7”s anyway. But there’s no room for fun here – zip your lip, you won’t be needing those toothy grins no more. This is frown country, and we’ll have none of that hip-shakin’ neither.

That title (The New Life) signals a change of pace, although they’ll apparently make do with just the one pace now, ta very much. Gone is the sass, gone is the swagger, gone is the sunshine. After a minute-long synth-instrumental intro track (all the rage nowadays but you ain’t never bettering Van Halen’s ‘1984’ so can we knock this trend on the head for a while please, bands? Cheers), first song proper ‘Pittura Infamante’ introduces all the themes you’re likely to hear on the album. The Cure. Factory Records. Dreampop. Buried electronics for texture. Mumbled vocals. A pace so staid and lifeless you’ll be wondering if you oughtta check for a pulse if they keep it up for another few songs. Which of course they do, and indeed maintain throughout. Wake me up when we get to wherever we’re going, huh?

Bands evolve and change as their members grow and expand their horizons; we all expect that, and sometimes they’re gonna pull us in directions we don’t wanna head. But it’s their job to convince us of why their promised land is the place to be, and The New Life fails to do that. Granted, there’ll be moments where you might find yourself thinking “cor, sounds like Joy Division, this, I like them” (or insert post-punk band of your preference, if you wish), and they’ll suck you in. Several songs later – damn it, several spins of the entire album later – you’ll be wondering how the hell you tell the difference between the songs, even when the guitar does its best to shimmer magnificently and those exploding sunlamps of synth work their hardest to ensnare your attention and dazzle you with their alluring (but not enduring) tricks. No one song is individually bad, and the production is positively sparkling, but as a collection it’s too flat, too samey. Even when ‘Occultation’ belatedly threatens to kick itself into life by way of a sharp shift into fifth gear, it swiftly cuts to a fade-out ending, and that’s the end of that. The damn thing’s just too cold, lifeless and uninviting to warm to. And yeh, sometime’s life is like that so there’s no reason why it shouldn’t be reflected in music – c’mon though, gimme a reason to choose to listen to it.

Essentially Girls Names have dragged us from where we met them – a teenage romance in a rainy summer, punctuated by cheap, sweet booze and clumsy snogs in the arcade – and dumped us in an existential chasm of a waiting room, with no-one to talk to and nothing to listen to but a New Order tribute band rehearsing miserably in the corner, polishing their one original song for a Captured Tracks audition.

Moody. Loveless. One-paced. Monotonous. Dull. If this is your new life, you can keep it.