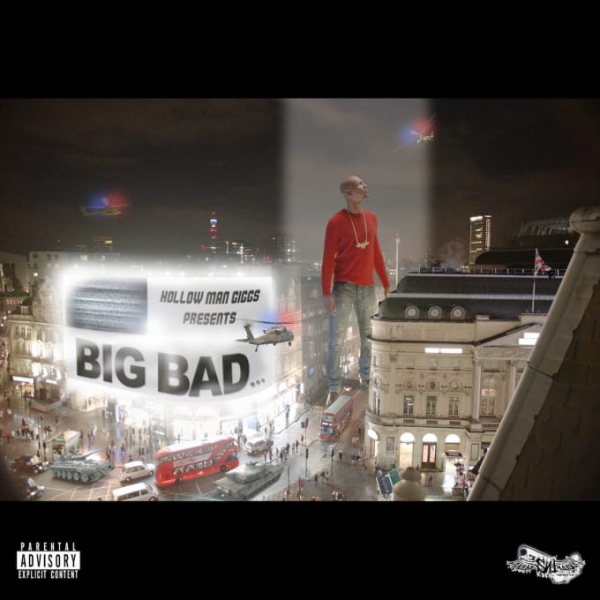 When you look at the history of UK rap, it can easily be split into pre-Giggs and post-Giggs.

Of course, that isn't to sideline the influence of other artists and home-grown genres that have defined the scene. However, if you were to pinpoint the moment at which the UK rap scene turned from one path to another, it'd be the arrival of Giggs.

His fifth studio album Big Bad demonstrates how far he has come in the last decade, with his Godzilla-like presence on the cover art being an accurate reflection of his dominance and influence in UK rap. He's been on this level for a while but this project feels not just like him reassuring his position in the UK but asserting himself as a force to be reckoned with worldwide.

The album kicks off with "Great Collectives", a menacing introduction that is exactly the kind of track the Peckham MC has nailed for over a decade - street tales with parallels to his current life and stature in the music industry. The next few tracks continue in Giggs' established comfort zone of head-nodding street bangers, with early highlight "Baby" standing out partly for it's hypnotising bass and also for some hilarious lyrics which I don't think can be printed here. "Mic Check" is another standout which sees the South Londoner sparring with New York legend Jadakiss. The beat allows both to shine and although the LOX rapper does his thing, there definitely needs to be a blanket ban on American rappers referencing the UK whenever they appear on tracks with British MCs.

Apart from that, the first and only real stumble on the album is "Talk About It" which switches pace and just doesn't feel the same quality as everything that preceded it. The guest features don't particularly gel with each other or Giggs' vocals, and it's a moment that the album could have afforded to drop. Luckily this is followed up by "Don't Go Hungry" featuring Labrinth, which sees the singer and producer deliver some incredible vocals that provide a cinematic feel to the Landlord's verses.

The only criticism of the second half of the album is that much of it is just more of the same, but this seems ungrateful given the consistent quality that Giggs delivers. Although tracks like 'You Ain't' and "Who: aren't show stoppers, they are both tracks that fit the aesthetic of the album. The project peaks with a pair of monster records right at its conclusion, with the Swizz Beatz produced 'Terminator' and "Gwop Expenses" with Wretch 32, both of which act as victory laps to close out the album.

Could the album be tighter? Definitely. But Giggs has never been an artist that delivers precision - his style has always been brilliantly brash and the best kind of indulgent. He doesn't appear on the cover art in Godzilla-like glory for no reason, this project is about tipping over buildings and is definitely not about neat arrangement or moderation. Big Bad feels like the perfect distillation of the raw energy and menace that Giggs has brought to UK music, only this time it's been taken to a whole new level.