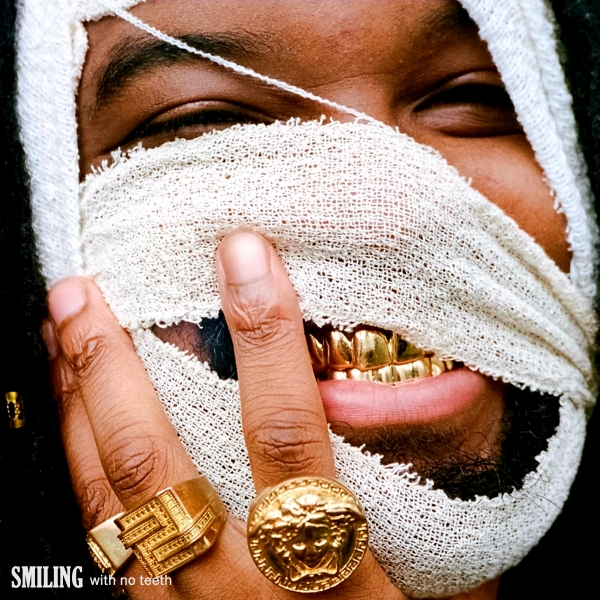 For a bandaged, gold emblazoned grin that reeks of evil intention, the one that adorns Genesis Owusu’s face on Smiling With No Teeth certainly holds no animosity.

Well, outwardly speaking that is. This is a party that has a room open for every thought and feeling; mental health discussions in the kitchen as the night edges into its wee hours, the bedroom where things can find their silky smooth sheets, all the way through to the hefty discussions and real talk of the effects of being a black man in a white world in the living room - things can understandably get very real, very quick.

The Ghanaian-born, Canberra-based artist Owusu has developed his presence throughout a smattering of singles and EP’s since 2017, all leading to a debut that’s orchestrated in telling a story without getting lost in the narrative. These are facts for the past, present and future.

Black dogs play predominantly in Smiling With No Teeth, a title which, depending on your viewpoint could either allude to the fake smile plastered over a face struggling to just stay awake today - or it could just as easily be the literal grin of someone that’s figured it out, man. The most famous of black dogs - depression - barks throughout most, as Owusu offers his insight into navigating through this unjust, and unbalanced world.

Stating in a press release that the album is “Performing what the world wants to see, even if you don't have the capacity to do so honestly. Slathering honey on your demons to make them palatable to people who only want to know if you're okay if the answer is yes. That's the idea, turned into beautiful, youthful, ugly, timeless and strange music.” There’s certainly no shortage of that syrupy goodness slathered throughout.

Finding its life in the variation of beats and sounds that clash together in a perfectly admissible way - under any normal circumstance a debut album with this many sounds colliding would be classed as a wonky territory. With Owusu’s energy as the driving force, however, it all meets at a zen crossroads. His personality dripping through each cut, twinned with the insider knowledge that he’s ready to share with the world, makes for something as entertaining as it is compelling.

High-energy hypnotic beats (“The Other Black Dog”), hip-swinging-sultry-smooth R&B (“Centrefold”), rattling punk bass lines (“Black Dogs”) and defiant foot-stomping (“Don’t Need You”) have all RSVP’d. Where the latter track, in particular, could be about depression it could just as feasibly concern a toxic relationship. One of Owusu’s major charms lies in his ability to transcend intended meaning, even on an album so deftly reliant upon carrying out a concept: “Once when I left your crazy ass / I had a therapy session / I won’t be the richest in wealth / I’ll be the richest in blessin’s”.

It doesn’t stop there. By seemingly giving romance-induced depression a voice on “Waitin On Ya”, where the dog seductively growls with an air of sanctimony “The alarm can’t disturb you in an eternal slumber, baby” above more velvety textures, it allows the intention to soak in subconsciously.

“Drown”, featuring screaming-cowboy meme generator Kirin J Calinan, comes as another hurried cut that sounds a bit like if Springsteen took a dose of speed and jammed with a latter-day Bloc Party - in all the right ways.

Fifteen tracks is certainly a big undertaking, but for no moment to come across as brooding or woebegone is merit within itself. Owusu uses his platform to dig into the nitty-gritty. Sparking out aggravated quips such as “You a woman beater / But you still want respect” (“Whip Cracker”), Owusu has things to get off his chest - and the palpable throat-rattling in his frustration strikes a poignant chord for all the injustice.

Similarly, “I Don’t See Colour” is filled with B.N.E (Big N.E.R.D Energy), ready to spotlight the systematic racism that comes from just being black. Lines such as “But somehow my actions represent a whole race” and “They won’t hesitate to kick us out this mall because we’re their target” play out without any modicum of woe, instead with more matter of fact, allowing the points to travel home. Still, with the rousing drums breaking into tribal territory, it feels like a forced hand call to arms.

Owusu’s debut offering not only manages to deftly balance style with substance, but does so with a jubilance that gives as much reason to curl up your own most toothy grin. More importantly, it also offers moments of reflection. Between his moves from alluringly measured R&B, to the outraged and the microphone smashing, fist-pumping, mosh pit inducing vocals and vehement rapping, Smiling With No Teeth is a party we’re all dying to be invited to but it turns out we're already there.