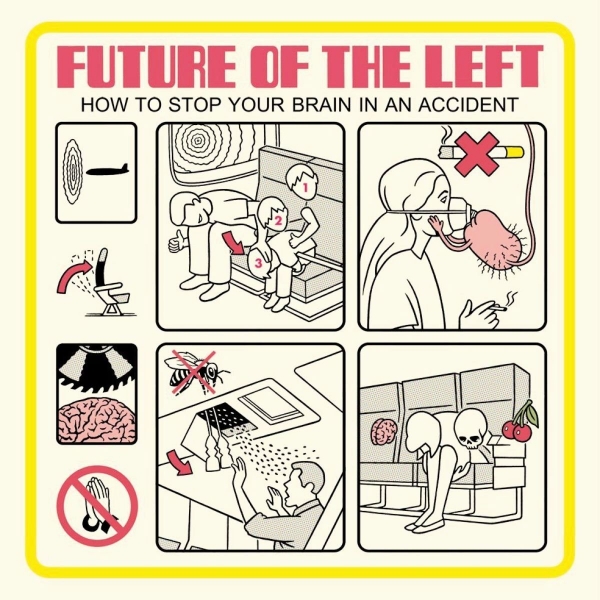 Future Of The Left have proven themselves to be, over seven years, three albums, a handful of EPs and a seemingly endless parade of incendiary live shows, one of the only truly individual, genuinely interesting, often absolutely excellent bands in the UK. Their new record is released in the light of leader, vocalist and songwriter Andrew Falkous’ recent marriage to bassist Julia Ruzicka (who used to have to put up with being in a band with Frank Fucking Turner), and it’s their most varied, challenging and unexpected release to date.

Largely abandoning his by now-faithful Roland Juno-60 keyboard, Falko has reached for the guitar once more (complimenting the excellent and fuck-off aggressive lead player Jimmy Watkins) but this is no indication of an attempt to fit in with rock tradition. In fact, this is a million miles from that. The band now a steady four-piece, they’ve pushed out a bizarre birthing that sprints from the wildly anthemic (“Johnny Borrel Afterlife” with its colourful chant “Roy, just a boy with the biggest head in school” and Patton-esque vocals riding high in the mix) to the hilarious (“Future Child Embarrassment Matrix”, proud owner of an opening line that’ll make milk spurt from your nostrils whether you’ve been drinking milk or not as well as loudspeaker vocals shouldering through the hung, sludgy racket) to the truly unusual (the received pronunciation rampage of disgust with society “Singing On The Bonesaws”, a song that will probably divide audiences as much as “Robocop 4: Fuck Off Robocop” did on last year’s The Plot Against Common Sense) without ever missing a stop-start beat.

Certainly there are plenty of assurances that we’re listening to the vivid work of Falko and co; the churn and chug of “I Don’t Know What You Ketamine (But I Love You)” with its heart- prodding middle eight and Jack Egglestone’s whipping, pounding drums; the pacey, addictive, almost annoying full-throttle Jesus Lizard charge of ‘The Real Meaning For Christmas’ and opener ‘Bread, Cheese Bow and Arrow’, espousing some of Falko’s favourite lyrical themes, you know, meals that eat themselves, call centre operators and of course the nature of the song itself (“The chorus ends. Big deal” he spits).

But the moments of real surprise are where the depth of this album can be found and appreciated. “French Lessons” is somewhere they’ve never been before. The bass-led, piano-splashed ballad opens “They say the price of love is a black hole/Where your friends were, where your social life sits.” It’s heartfelt, contemplative and might be the most nakedly honest song they’ve yet recorded. “You could kid yourself that your dreams amount to more than counting backwards from four” has a perceptive sullenness that’s counteracted by the occasional line like “I’m reading you like a pamphlet / That I picked up from an idiot.” You’ll go back to this over and over again, the song having that special, rare feeling of an instant classic.

Equally unexpected is “Something Happened” in which a piano threatens supernatural violence (it briefly sounds like Venkman trying to scare up the ghosts in Sigourney Weavers apartment). It’s fractious, frustrating (“This is awkward” croons Falko, he’s not wrong) before we’re launched into the sound of what might be a crowded party before being returned almost immediately to the spectral strangeness. “All of our mistakes become places we’ve left behind” he offers as we sway into an acoustic strum, but fear not there’s no chance of complacency – “I am using my tongue to chase off the flies from the balls of your feet” Falkous offers happily. It’s unsettling, it’s admirable.

As one would hope there are, in quick succession, two brutal burnings of the music industry, firstly in the shape of “How To Spot A Record Company” in which fuzzing Shellac bass is interrupted by stabs of guitar, slinky shimmers of lead, warped vocal time signatures and barrel upon barrel of bile towards the music buying public and those that pedal modern music to them. It’s a subject you feel may be close to Falkous’ coal-black diamond heart and this song builds to a storming, rousing conclusion that’ll have you ready to physically chew i-tunes out of your laptop. The second is ‘Donny On The Decks’ which digs at DJs with “a hat you can wear indoors.” It’s a great reminder that Falko never takes anything so seriously that he’s unwilling to approach it with humour. “The stink of sex is undeniable” he roars – maybe in reference to clubs, maybe politics, maybe life in general – either way it raises a grin at the same time as turning the stomach a little.

Closer “Why Aren’t I Going To Hell?” typifies everything that’s right with How To Stop your Brain In An Accident. Recalling Tom Waits’ ‘What’s He Building In There’ this is an acoustic, ominous tale of disbelief at human evil. “I’ve slept with the bests of the far flung East / I made a pact on my back and it suits me well” Falkous whispers, the Juno making a late-in-the-game sub’s appearance to great effect. There’s an incredibly funny/disturbing couplet involving a vacuum cleaner that you’ll just have to hear to believe and then suddenly a folk-beautiful anthemic climax.

It feels more and more that Future of the Left may do anything next. The atypical is becoming typical for them. Off-kilter ideas, invention and imagination are not the stock of rock music in its current state and while this album may not be the all-encompassing assault that was the signature of The Plot Against Common Sense this is a record that shows a willingness to change, adapt, try out exciting new things that simply retreading that formula would not have done. Outstanding. We got all the way through without mentioning Pledge or mclusky. Ah, Bollocks.