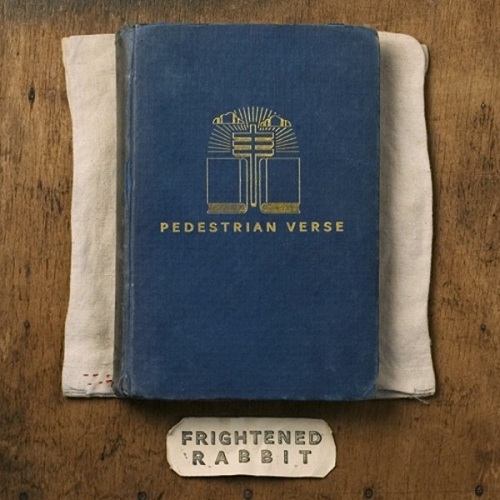 With a familiar taste of the understatedly-depraved lyrical content that, from the beginning, made the band unique within their genre, Scott Hutchison’s first words on Pedestrian Verse – “I am that dickhead in the kitchen” – sees the singer staying true to his past convictions in subject matter. “In so-called living rooms, Scottish pastimes come to roost” he croons in the opening bars of ‘December’s Traditions’ – just in case you’d forgotten the ever-prominent nationality of the band you’re listening to. As far as compositional style and general grittiness go, however, this album sees them moving one step further towards the rock end of the indie spectrum, with guitar tones thick and fuzzy, drums fast-paced and chord progressions that remain simple and set about with howling, distinctive melodies.

More notable than anything, though, Pedestrian Verse sees Frightened Rabbit make a triumphant return to the magnificent songwriting present on their lauded second album, The Midnight Organ Fight. It’s all down to devices like the gorgeously raw, booming components of ‘The Woodpile’, with heavy, staggered drums accompanying a deep instrumental presence and an uncluttered, masterfully-composed guitar solo leading up to the final meaty chorus. Vocal harmonies ring out from all sides throughout the album, and yet, in a way quite unlike certain banjo-toting indie-folk clowns, they aren’t overpowering, and truly complement the rough-and-ready lead vocals; and during moments like the closing bars of ‘Late Match, Death March’, as a playful fluttering of high piano keys makes itself heard, you realise just how expertly subtle this outfit can be. If any component of the album is going to clear away any misconceptions one might have about Frightened Rabbit being a standard-issue folk band, the guitar riffs laying beneath the vocals in ‘December’s Traditions’ would be a strong contender; they’re fast and immensely feisty, and are a stark reminder that this band are part of a musical scene that values boldness.

It’s not all timeless choruses by a long shot, however; there are tracks on Pedestrian Verse in which melodies fade from memory as you hear them, but it would be hard to argue that Frightened Rabbit’s is not a totally distinctive sound – from start to finish. It’s a wholly admirable trait of the band that, even at their least exceptional moments, their sound is unique to them in the same way that they are for bands like Neutral Milk Hotel or The National; their sonic elements could never be confused with those of another artist. To have hit album number four and still be noticeably progressing as writers and musicians is one hell of a milestone for a long-under-appreciated act, and it’s exciting to know that Frightened Rabbit can get this far in their career and continue to write songs like the ones present here.