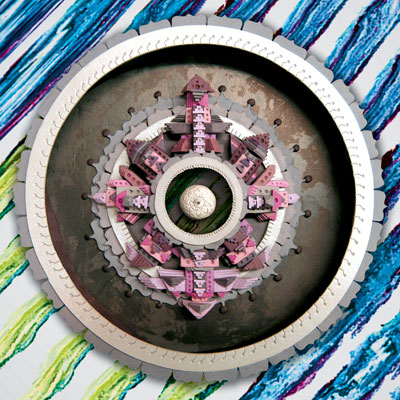 I’d like to take this opportunity to thank Kitsuné Maison 8 for introducing me to French Horn Rebellion. The band is composed Robert and David Perlick-Molinari, two brothers Milwaukee, Wisconsin, currently making their music in that current white-hot-bed of talent Brooklyn NY. Their debut album The Infinite Music Of French Horn Rebellion is well-placed to cause some serious ripples, so long as it delivers.

So, the album title; it definitely doesn’t go on for ever but it still feels apt, as there is an awesome wealth of variety and sheer audacious inventive playfulness here. Just short of an hour long, even by the penultimate track I was torn between replaying the one just finished or racing forward to the next to discover what new, whimsical and bedevilled musical idea FHB had conjured up. To reduce this album to its most basic coherent themes is criminal but nevertheless; it’s melodic, funky electro. It feels like horrific understatement; like describing The Notre-Dame as ‘having some nice touches.’

‘Running Through The Wild’ for example is a glitchy, almost morose prism of bass heavy synths and twinkling melodies. It segues perfectly into ‘The Cantor Meets The Alien’ which sounds like Robert Wyatt covering a Flaming Lips track. ‘What I Want’ then somehow makes the transition into Teenagers-esque feel good synth haven and then there’s the Kitsuné 8 featured ‘Up All Night’. In my opinion it’s also one of the best tracks on that compilation, and it’s arguably not even close to being the best on The Infinite Music Of .

Quite how French Horn Rebellion tie it all together is nothing short of divine. It’s all done with tact and class; sure some tracks are more deliberately dance-floor friendly than others, but not one of these 14 songs feel cynically tailored. It might be somehow down to the brothers’ hinted at classical background, that they have experience of traditional theory and the desire, and ability to break from it.

It’s seriously hard to pinpoint a place where this album falls down. Conceivably there are tracks that might feel a little too lightweight or too much like disposable pop for fans of the more left-field spectrum. ‘Broken Heart’ for example is a little saccharine in parts but it’s still possessed of a solid melody and some satisfyingly crunchy guitar breaks. Either way, there’s a strong chance your heart will still be melted.

From the instrumental, brooding interludes to the dance-floor bangers, this debut represents a late contender for album of the year. Obviously to call your music infinite is a little silly, probably over-ambitious and definitely very self-reflexive, but French Horn Rebellion have, at the very least, pulled off a damn fine coup.