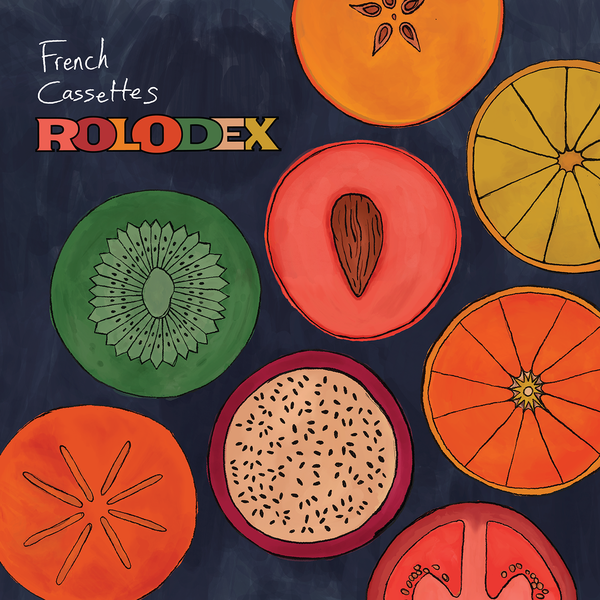 French Cassettes invite an irresistible, wanderlust-stirring energy to proceedings from the very outset - an atmosphere glaringly attributable to the indie quartet’s Bay Area origins; a setting that figures extensively in the genesis and realisation of Rolodex.

The product of late nights and early mornings that saw frontman Scott Huerta burning the midnight oil, painstakingly deliberating over demo material; the band’s long-awaited follow-up record has proved, without qualification, a process born out of various commitments, struggles and unyielding creative endeavour. A backdrop of unvarnished reality, rather than picture-perfect vignettes, frames the album’s development, with takes ultimately recorded amidst the less than salubrious confines of closets, basements and freeway-shadowing studios.

Such plight doesn’t fully intrude upon French Cassettes’ dust-strewn Americana. The band instead coast the backroads of summer-sheened indie-pop terrain, rubbing shoulders with the dewy tones of Devendra Banhart skewed with the overlooked spirit of Holiday Shores. This free-wheeling independence reverberates throughout “Santa Cruz Tomorrow”; Scott Huerta’s vacillative voice, the bass tones of Thomas Huerta and guitar flourishes courtesy of Mackenzie Bunch pursuing the unalloyed charm of mid-to-late noughties off-the-grid alternative routes. The latter proves less than coincidental considering Rolodex reflects an extended culmination of solid graft and an overwhelming desire to nail-down the sound of their sophomore LP to a tee.

Each track almost seems born out of an era where bands such as The Shins and Coconut Records were at their most active, an imprint that is certainly apparent on key standout “Utah” in its unfettered, beamingly raffish glow. The album, in this respect, stands as a collection of songs that, on an ambient level at least, hark back to adolescent hope; distilling its relative simplicity while lyrically contending with the eternal obstacle-littered minutiae of daily life, one that the San Franciscan outfit acknowledge in a relationship sense on “Sunday Soda”: “Well maybe I should be better at being somebody’s someone / Or I could make it easier coming home to no one / I’m not opposed to sleeping foetal.”

In the seven years that have elapsed since issuing their full-length debut Gold Youth, the band haven’t lost any of their innocent charm despite dramatic realignments in the wider musical landscape. A newfound gloss is certainly one notable addition, French Cassettes don’t skip a beat in this respect. Yet, they avoid the pull of reinvention, remaining true to the impulse that spurred the band into existence, therein which lies the essential attraction of Rolodex.