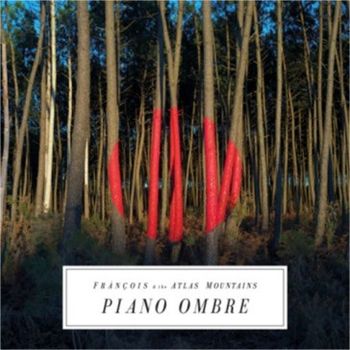 Listening to Francois and the Atlas Mountains’ new Piano Ombre fills me with dread – especially about halfway through the album. Not because the album is an unrelenting downer or replete with morbid preoccupation, but because I cannot cope with how quickly it all seems to come and go. The album, that is.

Let’s start at the last song, “Bien Sur” which closes the album on the highest note possible. Pianos, violins, and coursing synthesizer glitches calmly cresendo like a sunrise, Francois’s voice a sustained sigh, and the song is lifted like a ball of sonic warmth until it reaches a state of blinding pan-sensation. It is such a high note, and yet when it’s gone it’s gone. All that’s left is a desire for more: more time with this album, another album, more of this moment within this song.

It gets to be such that the aforementioned dread felt halfway through the album, on the equally wrenching “La Vie Dur,” is sort of its own mid-life crisis. It’s that end coda in particular–after some foreplay from an emotionally-candid-sounding Francois and a playfully-childlike rhythm concoction – which grips tightly and instills a deep, unshakeable obsession with the sweetness of all that melodic decadence. With each new listen, it starts to resemble that memory-feeling of the first time you drank Coca-Cola as a kid.

It has to be with the lack of inhibition and straightforwardness of a child that Francois and the Atlas Mountains music is described, as is how it seems to be produced. On their third album, yes, disco and synthesizers do appear (lead single “La Verite” is the record’s most accessible and danceable track, though it does exist as a sort of party-of-one), but they don’t replace the band’s knack for a well-conceived, organically-derived, and profoundly beautiful melody, and Francois’ ability to sound so utterly human—his most obvious strong suit.

While some indie rock bands might ditch the pianos and acoustics to revel in the gimmicks of success, and how unexpected fame might somehow be Reflekted in their work as more of a distraction, Francois and the Atlas Mountains seem more keen on sharpening their spearheads and continuing to evoke genuine emotion with the tools they were given. Rather than diving headfirst into a world of electronica to stave off any perceived obsolescence, Francois and the gang lay out every utensil in their arsenal and tastefully arrange them into an impressionistic portrait of whatever slice of life each given song is trying to depict.

“Summer of the Heart” lays out a lyrical image as cool and serene as the melody provides for. Aquatic textures chirp and squeal; sonar blips, whale songs, and other ecosystems provided by keyboards and nuances of bass and percussion; guitars accounting for both the ocean and its contents; Francois sings, “Hours to dive/Muddy waters/Swimmers wonder/What’s beneath?/After swimming/Drinking slowly/Coco-water/ From a straw.” The fact that the song is one of the few in English appearing on the album matters not, as the sensual, French-accented delivery of the lyrics and technicolor melody provide enough context clues to paint a seascape like an extra storyboard from The Life Aquatic with Steve Zissou.

So sadly as too the warmer seasons must be bid adieu, Piano Ombre must as well. It’s not that the album is particularly any shorter than any other album – clocking in at around 40 minutes – it’s that it’s so tightly-packed with such consistently good content and is so musically pithy, that you just can’t ever really get enough out of it. And Francois and the Atlas Mountains are just so dutiful about their songcraft, and so refreshingly un-ostentatious, that they don’t milk their own lack of ideas for all they’re worth (and for how long). Instead, they introduce you to people and places you’ll never meet or see again, but who you want to know forever. These little introductions are worth your while.