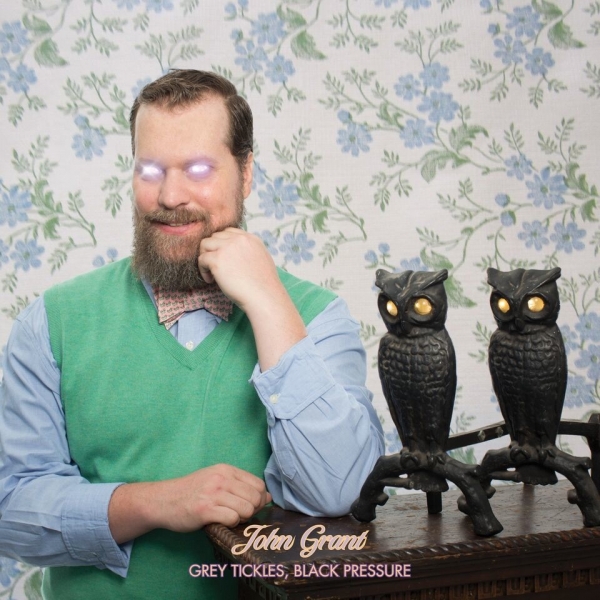 Journalists are always looking for an angle, a way of selling a record they like or a band they believe in, in a way that’s too often at the expense of the music itself.

With his monumental debut, Queen of Denmark, Grant was the comeback kid, bolstered by a little help from his friends in Midlake. At the risk of sounding crass, Pale Green Ghosts was "the HIV record," recorded, in the wake of a shocking diagnosis, in Grant's new home of Iceland. His sonic palatte had broadened to include gurgling synths and icy disco, but his wicked way with words and knack for a tearjerking ballad remain unscathed.

Grey Tickles, Black Pressure is the first John Grant album that doesn't come preloaded with a backstory. After such an astonishing early run, it's too soon to call it Just Another John Grant Album, but he definitely sounds settled in what he wants to do - have it all. For better or worse, the album acheives what you might call Peak John Grant.

The stately "No More Tangles" takes its typically unexpected inspiration from a shampoo bottle, spinning it out into a dense "metaphor for fear," as Grant puts it - fear of misrepresentation, fear of phonies, fear of solitude. Meanwhile the title track is a devastating treatise on illness, ageing and memory - far and away the best thing here, and likely the only song on a top-ten-bothering album to feature the word "parapraxis".

It's the exaggerated electronics of Ghosts which seem to run riot over the album though, which stretch the cool, detached delivery of older tracks like "Sensitive New Age Guy" or "Ernest Borgnine" into almost grotesque shapes. The pseudo-hip-hop "Snug Slacks" and the near-industrial disco spitegeist "You and Him" are relentless character assassinations of an ex, but it seems a waste of his considerable talent to boil down his lyrical content to withering putdowns like "You and Hitler...ought to spend your weekends cleaning out the garage."

Likewise, despite penning a compelling chapter on finding your own voice in her recent book Naked at the Albert Hall, Tracey Thorn's guest spot on lead single "Disappointing" seems shoehorned into the song - while Grant's swooping baritone flounces through its references to Rachmaninoff and Rachel Dratch, Thorn's displaced mid-Atlantic delivery feels painfully awkward. None of it exactly sounds amateurish, but tracks like these suffer from a (ahem) disappointing lack of grace.

"Magma Arrives" finds the sweet spot, though; setting a vivid scene in the opening lines, its hero "in his chambers now, luxuriating on a water bed," Grant quickly shifts the ballad's focus to mortality and depression, with the magma arriving ("Your face will melt right off your skeleton...") along with doomy keyboards, gargantuan drums and a wordless harpy choir. When Grant warns, "This won't be no damn walk in no damn park," it's one of the few times in the album you can't disagree with him.

Ultimately, while Grey Tickles, Black Pressure should be a career-definiting opus, it just seems unfocussed and uncertain; Grant's barbs aren't as sharp, which means too few of the songs stick like they should. And while John Grant always had great comic timing in his previous work, the emphasis on the tickles on this album just means there's going to be a little more pressure on him to perform next time around.