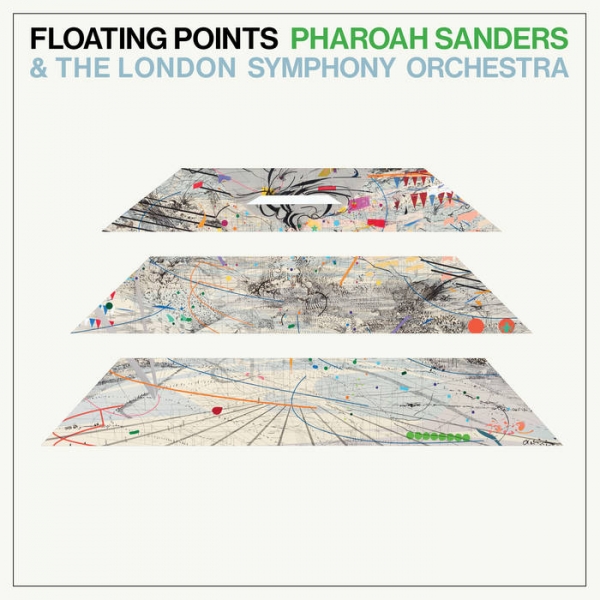 This pan-generational and genre-defying collaboration between Sam Shepherd (aka British electronic music producer and composer Floating Points) and American jazz legend Pharoah Sanders might seem surprising at first. But it doesn’t take much of a detective to sniff out the common ground between Sanders’ more meditative spiritual jazz masterpieces ala “Astral Travelling” and the expansive, levitational rapture that characterised Floating Points’ 2015 debut Elaenia.

Presented as a seamless 46 minute composition, Promises is the long-overdue culmination of a project that started with a duo session between Shepherd (on keyboards and electronics) and Sanders (on his trademark tenor saxophone) in Los Angeles. To complete these recordings from 2015, the string section of The London Symphony Orchestra added their not-inconsiderable grandeur at a socially distanced, one take recording session in London last summer. Promises matches the patience required for the project’s realization. Built on a sparse keyboard figure, the composition at the core of the collaboration can initially seem underwhelmingly slender, even repetitively monotonous. Repeated listens gradually reveal a different story.

Collaborations, especially ones between an established legend (with a CV including Sun Ra, John Coltrane, Alice Coltrane and a number of ground-breaking, at turns gloriously messy and breathtakingly lyrical solo albums, Sanders most certainly qualifies) and a contemporary musician, can prove an uneven match - at worst little more than a kudos-seeking guest spot where the dominant artist doesn't move an inch from their default position. Promises feels like a fully shared exploration in that it doesn’t adhere to either artists’ established idioms.

There are nods towards the wide canvases and cerebral slow-burn of the Floating Points catalogue prior to the dancefloor-friendly abstractions of 2019’s Crush. At 80, Sanders sounds much as he did on the more contemplative moments of his classic '60s and '70s albums ala Tauhid (1967) and Karma (1969). However, the overall mood of serene contemplation and decelerated, subtle lift-offs is closer in mood to the hypnotic prowess of ambient music, or perhaps the string-saturated rapture of Alice Coltrane’s Lord of Lords.

Although the initial impetus for the summit between Sanders and Shepherd came from David Byrne's Luaka Bop, the most compelling moments - Sanders’ sax entering the minimalist frame like first sunbeams cutting through the dark on a spring day; or the feverish bursts of free jazz squeal he emits as the music picks up in intensity - sound like the two musicians were destined to work together despite distinct differences in age, background and genre. This can make the stretches when Sanders isn't featured seem disappointingly house-trained: pretty and graceful, yes, but somewhat lacking in the live-wire capacity that Sanders still has the potential to bring, even when operating mainly in his more meditative register.