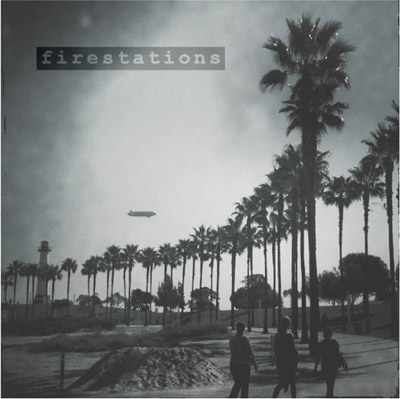 Firestations are immediately familiar to me, in a way – it’s through their connections. This duo’s members, Mike and Laura, are members also of Whole Schebang, which in turn overlaps significantly with London’s premier classically-tinged alt-folk-pop outfit Left With Pictures. The self-released Firestations EP, then, slots quite comfortably into the array of records already released by the bands in this informal folk collective.

This is not to say, however, that Firestations don’t have a sound of their own. Their music is a touch darker than what we might expect, fuzzier too. Mike’s voice often carries a subtle hint of weariness and yearning, which affects even the otherwise relatively bouyant opener ‘Let’s Leave Today’. A mildly unsettling tone underscores much of what is to follow, but this is always tempered by how warm and lazily inviting way Firestations go about their music, especially when Laura supports Mike’s vocals. This is a set of four songs less suited to the blazing summer afternoons we’re hoping for than the slowly darkening evenings which are set to follow them. It’s relaxing, downtempo folk, embellished sensitively and with restraint by electronics; a soft loop of beats here, a gently throbbing synth there. The highlight is perhaps the third song, ‘Catnap’, in which we are warned that “you only get half an hour / you only get a catnap” as a flugelhorn tiptoes around the delicate scene.

The danger with the small, DIY folk groups in Firestation’s mould is that their many self-released EPs and demos can be too piecemeal, too small and infrequently appearing to truly satisfy. While this duo have not entirely averted this possibility, what they have done is to craft a set of songs which despite its brevity, does stand up as a cohesive, if brief, statement. As is always the case, it will be any effort of theirs to create work in a longer form which will be the true test of their abilities.