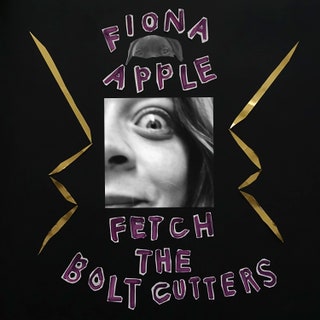 Played on drums, on a wurlitzer, on the walls of her house, with her sister by her side, played from her living room, with her hands and feet, played alone and with friends - Fetch The Bolt Cutters, Fiona Apple’s first album in eight years, is finally here.

Modern music’s original self-isolator, Apple’s fifth album in 25 years was recorded mostly at her Venice Beach home, with an inner circle of musicians included Soul Coughing’s Sebastian Steinberg, drummer Amy Aileen Wood, Cara Delevingne and five dogs named Mercy, Maddie, Leo, Little, and Alfie. An experience which spans fidelities - the record’s style is often as uncomplicated as the album’s cover, filled with rhythms which sound like field recordings and lashing of percussion which give the songs unsteady, freewheeling foundations. An obvious reference point is Tom Waits’ Swordfishtrombones and perhaps even a little Captain Beefheart, music which sometimes sound like it’s about to break apart, filled with chants and stamped feet.

Home recording is not rare, Vampire Weekend recorded their Grammy-winning Father of the Bride in Ariel Rechtshaid’s basement and it sounds as clean as fresh dishes; but what distinguishes this album is it’s DIY intent. This ethos turns the rejection of pretension into an art-form. In the way Apple prefers to include one of her dogs barking to a professional vocalist, for all the opinions churned out by think-pieces and lovers, the person she gives credence to on the album is an 11 year old called Shameika who once asked her as a schoolgirl trying to saddle up to the cool table: “Why are you trying to sit with those girls? You have potential.” Likewise, these songs are meticulously composed and rich with jaunty piano and strings, but equal import is given to a rough bass line, the hammering of a stove top and the messy harmonies of Apple and her collaborators.

What keeps them grounded is Apple herself, crystal clear in fidelity and intent: sounding like Joanna Newsom on the bridge of “Ladies” and like Lingua Ignota by the end of “Cosmonauts”. She sings of female solidarity, pushy lovers and the weight of depression with a wit which cuts through the chaos. She treats songs like therapy, at one point spitting “I resent you for presenting your life like a fucking propaganda brochure!”. Fetch The Bolt Cutters runs the gamut: Apple is angrier than ever but softer too, she sings sweetly and in yelps. It’s creator is the musician most aggressively crammed into the archetype of the eccentric female recluse (even by articles profiling her) but to the contrary, these songs are some of the most liberated in recent memory.

Two of the more quiet moments here - the title track and “Under The Table” - calmly shake off the nonsense of the past and all that mythologising. On the former she sings “the cool kids voted to get rid of me / And I'm ashamed of what they did to me / What I let get done / It stole my fun”. Except she when the cacophony drops out and she calmly asserts “fetch the bolt cutters, I've been in here too long / Fetch the bolt cutters, whatever happens, whatever happens”. It’s hard to imagine words which could sound more freed. On the latter she sardonically casts aside a pushy lover, singing “kick me under the table all you want / I won't shut up, I won't shut up”. When she sings these words and the piano syncopates, there’s nothing to do but smile.

But the record does also contain an angry pulse to compliment the heady tempos. On “For Her” she closes a three-part suite crammed into the album’s shortest song with the wide-eyed cry “well, good morning / good morning! / you raped me in the same bed your daughter was born in”. Just as Apple is no longer afraid to show the seams of her songs, so too is she fearless in presenting ugliness through beautiful melodies. Albums like this feel important because they unflinchingly capture the smorgasbord of life. Assault, sisters, love, evil, neediness, isolation and absolute freedom exist all at the same time, sometimes in the same sentence.

Amongst an excitable music press, it’s probably wise to exercise rare restraint; to not go giddy days after the release of an album it took the better part of a decade to make. When Lil Uzi Vert dropped his unexpected second album in March we witnessed just this: ecclesiastical words were spilt across the board, and yet here we are in April and already… who’s listening to Eternal Atake?

On the other hand… releases like this don’t happen often, so why squander the moment? Fuck it. Fetch the bolt cutters. This feels special.