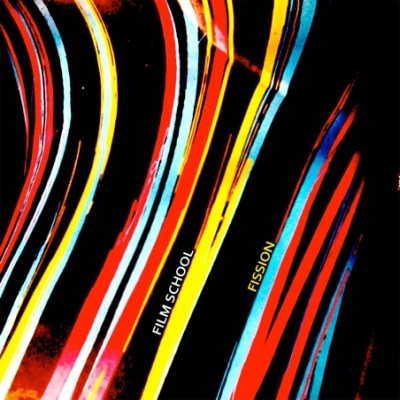 When Film School burst onto the scene with their self-titled effort in 2006, I was mesmerised. They’d managed to be at the forefront of the nu-gaze movement. They were channelling the sounds of late 80′s and early 90′s 4AD and Creation. There were plenty of knowing nods and glances to the UK music scene of that time. They followed that up with the rather lacklustre Hideout 12 months later, which seemed to lack the focus of the previous album. It felt devoid of the spark which had first brought them to life. It’s been three years since then and the band have shifted and changed personnel, which all seems to have added to their recapturing of former glories on Fission.

What immediately shocked me was the freshness of the opening refrain to ‘Heart Full of Pentagons’. A light sprinkling of beats over which some ethereal vocals float. It’s like hearing Blonde Redhead in a less sanguine mood. Then the guitars kick in, followed by Bertens vocals, driving the song through the cloud layers up into the stratosphere. The rest of the album follows this pop-tinged shoegaze pattern. ‘When I’m Yours’ skips along through an assault course of guitars and drums. Once again, the vocals flirt with the register, adding a series of threads for the listening to navigate. ‘Time To Listen’ could have been taken from a long lost New Order album fronted by Gillian Gilbert, whereas ‘Waited’ would easily have slotted onto a Ride album at their Creation-era hey-day. Fans of School of Seven Bells should checkout ‘Direct’, the duelling boy/girl vocals giving these young upstarts a run for their crown.

Whilst this might not be the most original album that’s grace my ears this year, it’s one that begs repeated listening. The pop riffs, wonderful vocals and driving rhythms turn what could otherwise be seen as a purely reverential album into something that holds the attention and causes those endorphins to coarse through the veins. And, in this era of bland identikit bands, can only be seen as a good thing.