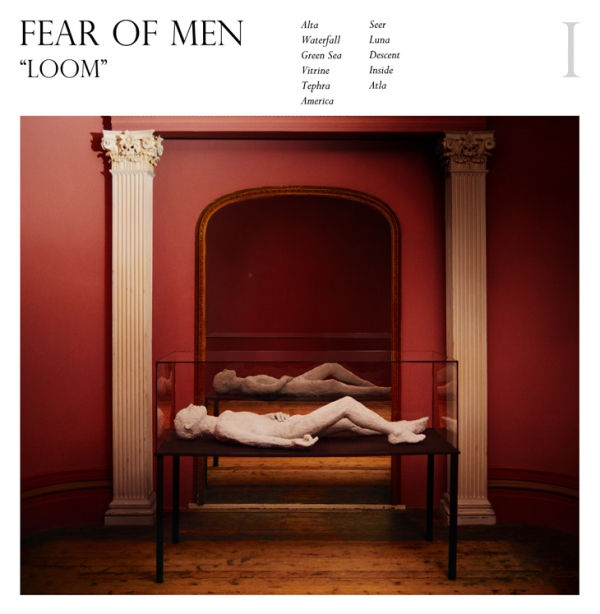 “My first vision of earth was water veiled. I am of the race of men and women who see all things through this curtain of sea, and my eyes are the color of water.” – Anais Nin

Fear Of Men front woman Jessica Weiss makes no bones of her scholarly influences or art school background, counting among her influences Sigmund Freud, Sylvia Plath and, yes, Anais Nin. While Weiss has indicated that Fear of Men began as an art school project involving her study of Nin’s work – indeed, one of Nin’s most profound works obliquely speaks to an incestuous relationship with her father – I don’t offer the above quote as yet another jumping off point to discuss Weiss and her band’s influences. Loom is rife with allusions to water, employing it as a compelling motif for navigating through the complexities and paradoxes of romantic relationships.

Water is one of nature’s truly classical paradoxes – fundamental to life, but perhaps the swiftest destructor of it. Indeed, as far back as biblical times, water has epitomised even God’s dual nature, wiping the world’s evils away in Noah’s great flood, springing from a rock to quench the thirst of Moses’ thousands, engulfing Pharaoh’s army in the Red Sea. Hailing from Brighton, water is undoubtedly a constant backdrop of the band’s everyday life, summer days when the sun glazes the ocean’s surface, the distant rush of its waves heard through an open window, the confluence of the grey sea with the grey sky in falling rain. Just as assorted as water’s presence may be in life, Weiss uses it in a variety of contexts on Loom – as cleanser and healer in the wake of a relationship’s dissolution on “Waterfall”, protector and comforter from loneliness on “Green Sea”, portent of the need to move on in “Tephra”.

Throughout Loom, Weiss conveys her thoughts in an insular first person conversation with a nebulous “you”; arguably, not since The Smiths have we come across a group so hypersensitive of their own inner workings as Fear of Men. Witness their album artwork – last year’s single compilation, Early Fragments’, ancient statues, single “Luna”s twisted, calcified canine corpse, Loom’s plaster still-life of a reclining man housed in glass – the exteriors are fixed, unchanging, without color or expression. The root of a person, of a relationship, is nothing to do with the veneer on the outside, it is constructed of the intangible within. Relationships are vital to engaging our true selves, lest we become “empty vessels making noises”, as Weiss sang on Early Fragments’ “Born”. On Loom, Weiss repeatedly references this idea of the physical self being meaningless – from “Vitrine”s yearning, “tell me that you’re perfect still on the surface/but it’s happening beneath” to “Descent”s foreboding, “the body and bones are just a veil…inside I am not well”.

Musically, Fear of Men has fleshed out the comparatively thinner and more brittle sound of Early Fragments. “Green Sea” and “Seer” reappear from that collection here, and are noticeably – though, moderately – lighter and simpler than their peers. A vast majority of the time, the band’s augmentations pay dividends, as swelling and winding string arrangements and accents of flute and violin lend their sound a dash of color and added sophistication, though the dissonant outro is a trick turned one too many a time. Where Fear of Men capitalize in spades on Loom is a newfound sense of immediacy endowed across the board, save for the two holdover tracks, due in large part to a richer, fuller production, with added emphasis on the low end. On standout tracks “Tephra” and “Luna”, Weiss’ vocals pack an unforeseen punch, equaled by the cascading waves of guitar and drums she rides atop, rather than simply wallow and float amongst as in previous outings.

Ancient Chinese philosopher Lao Tzu remarked that “nothing is softer or more flexible than water, yet nothing can resist it.” With Loom, Fear of Men have proven to be just as brilliantly complex as that natural wonder they so often invoke – deep, refreshing, mysterious, life-affirming.

Stream the album now over at Pitchfork Advance.