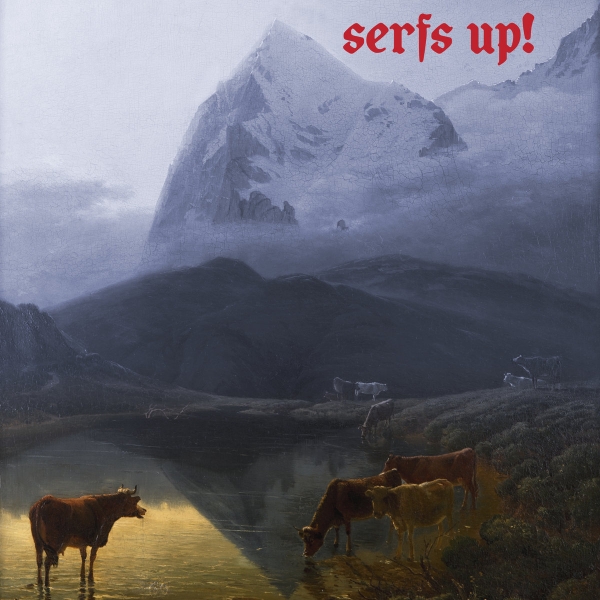 Thank the Lord! Fat White Family are back!

Their previous album, Songs For Our Mothers, was released all the way back in January 2016. To most humans, that feels like a lifetime ago – especially considering all of the dystopia-as-real-life events that have shaken the world since. In the meantime, there have been no less than about six million side projects, spin-off bands, tangent albums and colouring books released from various configurations of the group – so much so that spin-off band The Moonlandingz has its own spin-off band, the rather excellent International Teachers of Pop. So it just seems like the right time for the Fat Whites to make their long-overdue reappearance, three years on, because the world needs them now as much as ever.

The band’s core-members Lias and Nathan Saoudi relocated to Sheffield to rid themselves of temptations, both real and figurative. They, of course, were joined by Saul Adamczewski, and the album was recorded at their own Champzone studios. Serfs Up! was finished about six months ago, and it’s being touted as the Fat Whites pushing their sounds outward, into another realm, blowing away the dankness and decay of their previous records. This is largely, thankfully, nonsense.

“Feet”, which you’ve already heard, is surprisingly smooth – like polished chrome. There’s a lingering sonic ancestry on display (Suicide, Cabaret Voltaire), but the inspiration is drawn from the dead-eyed, plastic '80s output of the bands they love. The beat, insistent and hypnotic, pushes against Lias’ gloomy baritone intonations, creating a delicious tension between instrumentation and vocals.

“I Believe In Something Better” follows in the same vein, albeit the vocals are distorted and sharp, as though run through a cheap transistor radio before being committed to tape. There’s an aggression here too, as the track gradually hints at – and then explodes into – a furious wall of horror movie squall.

Has there ever been a dream-pop/yacht rock hybrid about teeth in a vagina? Answers on a postcard. Fat White Family’s attempt - “Vagina Dentata” - is all of this and more. Imagine Tame Impala recording ‘on-hold’ muzak for a bank hotline, and you’re halfway there. “Kim’s Sunsets” fuses meaty dub with blaxploitation soundtrack sounds to staggeringly hilarious effect... they’ve essentially bootlegged the Danger Mouse sound, lock stock and barrel. It’s one of the highlights of a richly kaleidoscopic set.

They experiment with yee-haw wild west cowboy flavours on “When I Leave”. “Bobby’s Boyfriend” has a hellish, Tom Waits-ian dissonance, throwing back to his similarly claustrophobic Rain Dogs. “Fringe Runner”, with its synthetic glam beat and monstrous serpentine bass, is easily the most disorienting, challenging track here. Strangely, it also conjures memories of the kind of oddball skronk that video game companies used to put on stuff like FIFA, before they went for ‘anonymous indie’. It would have fit beautifully on FIFA 2004 between The Raveonettes and Goldfrapp (remember “Train”? Retro glam with a spiky plastic edge? Precisely what Fat Whites are doing here).

Elsewhere you have a Baxter Dury rave-up “Tastes Good With Money”, and the rather delicate “Oh Sebastian”. The former is a classic stripper-glam stomper, with amplified sleaze – Dury is a natural fit for such a lascivious strut. Somewhere out in the ether, Marc Bolan is smiling. “Oh Sebastian” is the most tender thing they’ve ever done – and it, too, is oddly Bolan-esque, with close vocal microphones, heavenly backing vocals and swooning strings.

Time will show whether this is the best album released by the Fat White Family, because all three so far have been so faithful to the overall aesthetic of the band. Any of the songs from any of the albums could have appeared on any set and worked. But, taken as it is, Serfs Up! is almost certainly their most accessible, most coherent collection to date.

Their music always has been challenging enough for musos to enjoy, manly enough for boys in parkas to talk to one another about, and degenerate enough to appeal to people who still think Kurt Cobain is cool. Serfs Up!, for all its successes, doesn’t offer the Fat White Family a route into the mainstream, and perhaps that’s never been what they have wanted. But music this good demands to be heard by as many people as possible.

Somebody needs to give EA Sports a call.