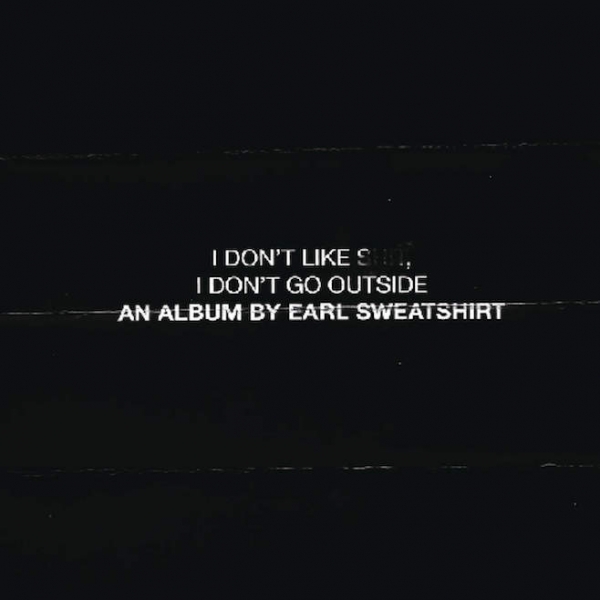 Earl’s darker side always came off way more authentic than that of his Odd Future affiliates - more psychological, more vividly dysfunctional. On this latest album Earl’s at his bleak, misanthropic best. He’s switched the playful folkloric wit - always vaguely reminiscent of DOOM - that lent his last album Doris an element of almost comic book villainy - dark, yes, but just a costume, just wicked fables - for a more raw, internalised rap style, bristling with grim autobiographical detail. It reads uncomfortably like a psychiatrists’ checklist of neuroses, told through a dense fog of weed smoke, under a lazy haze of liquor, forced back one further by a pounding wall of prescription pills – no gimmicks, no costume changes, and noticeably short on big name features. It’s also noticeably short. This album’s only thirty minutes long, made up of ten tormented monologues, all buried beneath a disturbing cacophony of sludgy disjointed production. It is short, but it’s entirely claustrophobic. We don’t venture outside the warped contracting walls of Earl’s Los Angeles apartment; we barely leave the couch – and even in the daytime the blinds stay snapped tightly shut. Of course, Earl doesn’t like shit. Earl doesn’t go outside.

Doris was a good album (and a great debut), but it felt consciously unassertive – congested with too many guest spots, vacillating indecisively between production styles. Earl’s aware of this; he’s admitted to it in interviews. But Doris was understandably cagey. Earl only really became famous while he was at boarding school in Samoa, and returned to America at the tender age of 18 to perform his first major gig in front of a couple thousand adoring fans at New York’s Hammersmith Ballroom. Inevitably, Earl’s guard was up. And it told at times in the writing. Doris was tentative and self-effacing, at times even hostile. On the album’s opener “Pre” for example, Earl’s terse and defensive when he spits: “I dealt with addiction” ...Ok? Next Question. A year and a half later and Earl’s absorbed the shocks, assimilated the weirdness, and thrust open what was perhaps only reluctantly glimpsed at on Doris. On the album’s lead track “Grief”, Earl raps confidently: “Step into the shadows, we could talk addiction / When it’s harmful where you going, and the part of you that know it / Don’t give a fuck, pardon me for going into details”. And this time Earl does talk addiction, lots of it. He talks details too, lots of them. This new record is brutally candid; it’s a visceral, unrelenting snapshot of what it’s like to be genuinely fucked up. It’s also unambiguously Earl’s.

Earl’s aggressively introspective this album; the whole thing is set inside the tangled labyrinth of his own addled psyche. And it’s a gloomy place to hang out. Earl works through all sorts of demons and afflictions across these ten tracks: his depression, the loss of his grandmother, his break-up, his struggles with fame, his fraught family ties, his drink and drug problems; it’s full of chronic angst, alienation and complex self-loathing. But there’s nothing therapeutic about this working through (that is, not on the space of this record.) Earl’s unflinching brand of self-scrutiny grows obsessive and unhealthy; it’s strangling. Of course it is: he’s in his apartment, he’s on his own, he’s high as fuck, he’s talking to himself - light dimming, ashtrays filling, bottles emptying. Line by line, each heartfelt confession is countered unpredictably with some grim realisation. On “Grief” (probably the most interesting track on the album) Earl raps: “Thinking ‘bout my grandmamma, find a bottle / I’mma wallow when I lie in that / I just want my time and my mind intact” - only to be compounded one further – “When they both gone, you can’t buy ‘em back”. It all plays out discordantly in this stylised mode of stream of consciousness: “I’m here and I’m there / And I’m up and I’m down / And I’m low and I’m peakin’ / It’s cold in the deep end”. It’s hell in here. On the track “Inside”, Earl seems in control of his vices when he raps, “Face-drinking smoker, it help me duck / when emotion jab”. Only to concede jarringly two lines later as the vocal pitch slumps lethargically: “Sipping ‘til I melt / Never trying me, I’m diving, falling victim / to myself”. At times Earl sounds dangerously unhinged - blunt lit, fifth of whisky to hand: “Don’t know where I’m going, don’t know where I been / Never trust these hoes, don’t even trust my friends”, Earl raps woozily in the hook to the track “Grown Ups”.

This might be Earl’s most mature and nuanced lyrical performance. But it takes a few listens to fully appreciate the depth and complexity of the writing, because the production is so weird and abrasive (it demands revisiting, which is why Earl made this thing so short). It’s full of hissing static (Earl’s “only happy when there’s static in the air”), shimmering waves of synth, deep gurgling bass, sparse echoing snares and scurrying, emaciated hi-hats. Production-wise, I Don’t Like Shit, I Don’t Go Outside doesn’t draw from conventional Hip-hop sources. Earl’s not been “diggin’ in the crates,” he’s been surfing the web for sounds. This record (at least half of it) finds its most complete analog in the strange musical atmosphere of an obscure Internet rapper from Houston, Texas, called Viper. He had a viral hit with a bizarrely enchanting mixtape entitled You’ll Cowards Don’t Even Smoke Crack. Viper took the classic chopped & screwed southern cloud-rap sound and slowed it down and distorted it to such an extent that the end result was genuinely sinister, producing all sorts of sluggish and demonic background noises and distant otherworldly echoes. Earl’s also drawing on the warped chthonic sounds, existing exclusively in perverted YouTube sidebars, of popular chart hits slowed down “800%.” “Mantra”, “Faucet”, “Grief” and “Grown Ups” were all to varying degrees constructed within this frame of reference.

Fittingly, Earl’s vocal pitch and delivery isn’t the crispest or most straightforward thing either. At times, Earl slows his flow right down to the point that lines begin to splinter and fragment and collapse mid-sentence; at others, Earl’s flow snags awkwardly on rough, misshapen drum sequences (see “Grief” or “Grown Ups”) or skips beneath jangling, tinny, off-kilter piano samples (see “Off Top” or “DNA”.) On tracks like “Inside” and “Faucet”, Earl raps in this slurry monotonous style, evocative perhaps of the numb indivisible geometry of the apartment he’s been interred inside: bending walls, amorphous shadows, melting clocks – that sort of thing. On the second half of “Grief” the instrumental gradually atrophies, muffled and slowed to a near catatonic stillness, and Earl’s so audibly high he sounds as though he might as soon fall into a slumber mid-verse, cocooned by a thick cloud of weed smoke, his “fleeting thoughts on a leash / for the moment”. Sonically, this thing is stripped to the bare minimum – down to the bare bones of drumbeats, lashed by howling winds of synth. It gives everything over to mood; it doesn’t drive the songs, but churns disquietingly in the background, like weather.

There’s a real discipline and focus behind this record. It’s messy and discordant, but to achieve that particular sound – the sound he evidently wanted on Doris – one would presume Earl had to reject a lot of good beats, by a lot of big name producers (Earl produced every track but “Off Top”), and a lot of potential guest spots (“I been limiting my features”, he raps on “Wool”) – there’s no Tyler, no Domo Genesis, no Frank Ocean. And better for it. Earl had a clear aesthetic vision and worked hard to realise it. I Don’t Like Shit, I Don’t Go Outside won’t be for everybody. I’m almost certain that this project won’t be as critically or commercially as successful across the board as Doris was. But I doubt Earl really cares; the art comes first, and as a result, Earl’s produced an album that’s concise, consistent and cerebral.