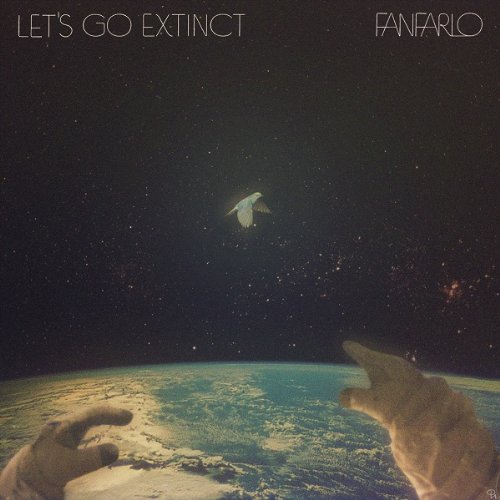 Fanfarlo have been hovering on the peripherals since the release of their first album in 2009, with their sweeping, instrument-laden melodic pop springing up on US TV shows galore. Now back with their third album, Let’s Go Extinct aims to put the band back on the map, getting back in touch with their original folky pop sound, sprinkled with ambient musings on the big questions.

The album opens with a “Life in the Sky”, a track that blends the quiet intrigue of hushed boy/girl vocals on the verse with horn augmented instrumental breaks and what seems to be a sound desk of electronic, space-inspired effects. A nice scene-setter, it introduces the album’s exploration of evolution, and what else might be out there.

The space-age, electronic sounds that pepper many of the tracks on Let’s Go Extinct do a nice job of complementing what’s going on lyrically. Whilst thankfully we don’t get too deep in Darwin-ism, the whimsical musings of the lyrics, and the musical suggestions work throughout to deliver a satisfyingly themed and thought-out album, akin to enjoying a few beers in the park, looking up at the sky, and trying to figure it all out.

Fanfarlo’s calling card, previously and in Let’s Go Extinct, is their inventive and rich use of a whole host of instruments. The stuttering horns on “Cell Song”, the tremolo synths on “We’re the Future”, and the whole damn orchestra on “Painting With Life”.

“Myth of Myself” has a Bright Eyes-esque crescendo, and sees lead singer Simon Balthazar give a display of emotion and passion that lacking somewhat from the rest of the album. His voice when leaping from note to note is listenable enough, but the forced-sounding dynamics feel like they’re not doing justice to everything else that’s going on, particularly when there are the rich, warm undertones of Cathy Lucas’s voice being disappointingly back-seated.

“Landlocked” kicks in sounding like an eighties film soundtrack, which seems appropriate given the pseudo-serious nature of the examination of the self wouldn’t go amiss in a John Hughes film (‘So we listen to the echoes/And you think it brings us closer’). The final and title track wraps up the album in a neat little bow, a conclusive end to a record that ponders and pontificates to a backdrop of disco-inspired 80s sounds and infectious choruses. Fanfarlo may not be breaking new ground with this, but they’re building on their previous foundations nicely.