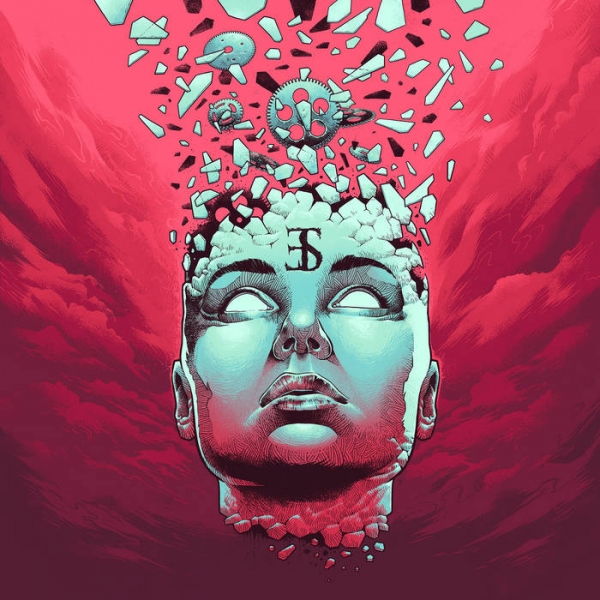 Justine Jones and Sammy Urwin are quite possibly the two busiest people in the UK rock scene; maintaining what has quickly become one of the most respected metal labels in Europe, fronting numerous other projects, all whilst leading the current wave of Britain’s heaviest acts in Employed To Serve.

On this fourth effort, the band are emphatically not fucking around. This is a confident and strident album, virtually completely shedding the unpredictable mathcore spite of their first few efforts. They are instead sporting the bass, chug, and the cheesy excesses of metal like a well-worn backpatch. But all the while doing it with the shudder and squeal of a truly modern hardcore production that’ll fit ETS snugly alongside US heavyweights like Knocked Loose.

This is the band shamelessly embracing various strains of the genre’s wallop that informed their musical education. That involves wilful and knowing nods to punked-up old-school thrash (“The Mistake”), techy groove metal (“Sun Up To Sun Down”) and even '00s nu-metal, with “Twist The Blade” rocking a hilariously spat mosh call straight from a Limp Bizkit song on the lyric: “Well I’m the one to blame for this tirade”. Sprinkle in a few stomping breakdowns and deftones-ian atmospherics and you've got a pretty full-proof mix.

The biggest love letter to the art of riffs, though comes at the very start of opener “Universal Chokehold”, where a sparse picked guitar and violin intro gives way to an epic and regal crescendo that just reeks of classic heavy metal, before kicking into a kinetic double time groove gapped with brittle screams. It's ridiculous and over the top in all the best ways, and an astounding way to open a record.

Jones’s vocals have retained their thuggish intonation, but gained a confidence that makes you feel in safe hands through the pits of despair. Casey McHale’s drums are a standout too, rolling and stabbing with disorienting precision at the forefront of the mix on most of these songs, and making it look easy.

The only trade-off of this new approach is that those with a keen ear will probably see whats around each corner. One of the strengths of ETS’s last album, Eternal Forward Motion was the lurching fear of the next riff, the next nightmarish tempo change. Although there's plenty of switch-ups in style here too, they stick a bit closer to the metal songwriting playbook, and that can make for a slightly less engaging listen.

Either way, it's hard to imagine a metalhead old or young not finding something they want to kick things to on Conquering. Despite its love for the retro, it's still a modern and cutting edge work that feels essential for the scene right now. It's great to see a band from the back-ends of UK hardcore make a statement as gratifyingly massive as this one, that will hopefully grant them the audiences they deserve.