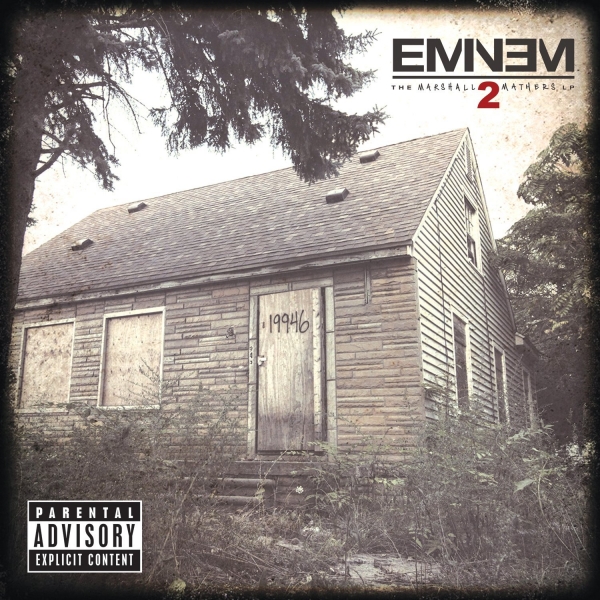 What’s the point of a sequel, anyway? It’s defined as, “a literary work, movie, etc., that is complete in itself but continues the narrative of a preceding work.” In the case of music, the question becomes more important given that most albums have little, if any, overarching narrative. Eminem’s Marshall Mathers LP could certainly be viewed as having a narrative, but it’s not exactly a linear one. Or a cohesive one, for that matter. However, it does sort of tell the story of a late 20-something dealing with the pressures of fame as well as being a media pariah.

So what can be expected from a sequel thirteen years later? Well, Em is no longer the poster child for everything wrong with America. Nor is he still dealing with the gravity of sudden super-star status. Instead, we find a 40-something attempting to be an elder statesmen of rap who’s confused about exactly how much of a shit he gives about his legacy (“Top 5 in this motherfucker and if I don’t make the cut/What, like I give a fuck”) only to reiterate how great he thinks he is later in the album (“Fuck top 5, bitch, I’m top 4/ And that includes Biggie and Pac, whore”).

Either way, it’s an accurate statement, despite how arrogant it might be. Eminem is unquestionably the most technically gifted rapper alive (and perhaps of all time), and over the course of MMLP2, he proves it again and again. There are at least a half-dozen verses in this album alone that stand amongst his best ever. Further still, “Rap God” eclipses “8 Mile” as his finest song in terms of pure rapping ability. At six minutes and a minimal chorus, “God” finds Em turning in a performance of dazzling wizardry, going as far as rapping at Busta Rhymes speed during the third verse. He doesn’t say a whole lot beyond hip-hop braggadocio, but Eminem is one of the few rappers whose gift at saying nothing is something to behold.

Even his narratives are interesting, to a degree. The album opens with one of the only two songs here with any real lyrical substance: Entitled “Bad Guy,” it’s a sequel of sorts to “Stan” wherein Eminem gets his come-uppance…in a way. And the penultimate track, “Headlights,” is a love letter to Em’s mom that finds him in full apology mode: “Cause to this day we remain estranged and I hate it though/ Cause you ain’t even get to witness your grand baby’s growth.” The rest of the album finds Mr. Mathers discussing well-worn topics like bitches (“So Much Better”), reflecting on the demands of fame and how he didn’t ask for it despite how hard he worked for it (“Survival”), and how he’s torn between being honest and being Slim Shady (“Evil Twin”).

So, in other words, he sounds lost as an artist. Sadly, the production throughout doesn’t fare much better. MMLP2 is the most perplexing collection of beats of the year. “Rhyme or Reason” awkwardly rides the Zombies’ “Time of the Season,” “So Far…” chops up Joe Walsh’s “Life’s Been Good” into second-rate Mike E. Clark, and “Berzerk” is an everything-and-the-kitchen-sink boom-bap mess of Beastie Boys and Billy Squire samples. The worst part is that supposed guru Rick Rubin had a hand in all three. You’ll even find clumsy a schlock-rock beat in the aforementioned “Survival” from the otherwise remarkable DJ Khalil.

That said, some of the production here is fantastic. Em’s contributions, as on The Eminem Show, are some of the strongest beats here. The minor-key piano stabs of “So Much Better” and the Hans Zimmer-esque “Asshole” don’t gracelessly stick out, but instead propel forward without drawing attention away from Em. The best here, though, is DVLP’s “Rap God,” a beat the morphs a half-dozen times to match Em’s Herculean delivery through synths that both drunkenly see-saw and screech like an airhorn.

Which, ultimately, makes MMLP2 an incredibly frustrating listen. On the one hand, you have Eminem who, even in his 40s hasn’t lost his touch as a rapper or lyricist. And, given that hip-hop is fundamentally a young-man’s game, that’s saying something. Yet, on the other hand, you have that same exceptional emcee who doesn’t have much of anything interesting to say over questionable production choices. Even when Em’s clear successor, Kendrick Lamar, trades flashy verses on “Love Game,” it’s too little, too late. The album plays as if Eminem decided to prove, once again, that’s he’s the best rapper alive just for its own sake. If that was the case, then, he could’ve just put out “Rap God” as a stand-alone single and called it a day. Instead, on “Evil Twin” he declares, “Hogger of beats, hoarder of rhymes/ Borderline genius who’s bored of his lines/ And that sort of defines where I’m at and the way I feel now.” Marshall, if you’re going to make a sequel to one of the best rap albums of all time, you may want to rethink that.