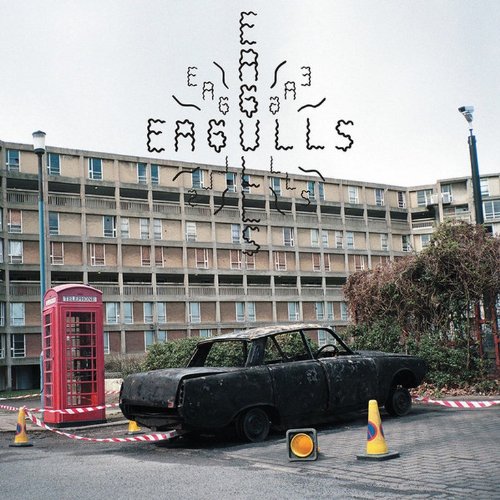 The rollicking Leeds animosity crusade of Eagulls, engorged with snarls, bloody sputum and loose teeth, are championing neo-classical punk – it’s not crammed with harpsichords or viols, but it’s harking back to the classic period of the genre.

In days of yore, the punk movement was spurred on by desire for Bacchanalian hedonism, anti-establishment rhetoric and a political change – it was as much a wave of counter-culture protests as it was a style of music. Somewhere, in the DIY ethos and chaotic ephemera, it was hijacked, monetised and shat out by majors. While the genre’s lost it’s way in the years that followed the golden era during the late ’70s, there are some who are hellbent on dragging it back to its roots, at least thematically. FIDLAR are guzzling, fucking, snorting and yelling stateside, heralding their camp’s coup d’etat, and Eagulls are poised to commandeer the reins here.

They’ve garnered hefty controversy, long before their first LP was even on the horizon. The rozzers invaded Eagulls’ pad when the gasman got worried upon discovering some shady-lookin’ decomposing brain-y goo, and there was a livid open letter taking potshots at everyone from surf-pop nostalgics to posh kids to women in bands. It’s quite clear that the Northern fivesome have got a few axes to grind; while not everyone’s going to be in agreement on the content, it’s hard to deny that they’ve got a lot they want to get off their chests. In true punk form, they’re careening along, apathetic to outsider opinion, quite content to sing their songs about sleeping on floors and council estates to anyone that’ll listen. You can bet your bottom dollar that they’d still be making a racket even if no one was watching.

Musically, it’s not all Sex Pistols-aping yowls – there’s a pop bent on offer, and some of the krautier motoriks, alongside dour six-stringers, imply a post-punk vibe that eschews bellicose noise. “Possessed” is loud and brash, but on the whole, it’s more like Vaccines than Black Flag (which presumably Eagulls will take offence to). However, this anthemic guitar-poppery is just the kind of thing that makes them lovable and relatable and not just Shrek-level grumpsters with a passion for cantankerous whinging. It’s nice to know they can churn out a damn fine single or two as well. “Nerve Endings” is a helluva lot darker than “Possessed”, but the chantalong thread remains, allowing for the anxious mantra of “No music/no sex/no immediate out just for my health/I’m still nervous/I’m still nervous/I’m drunk/this cold feeling, nervous/my feelings spread out,” to ring out almost infinitely.

Of course, it’s not all catchy hooks and infectious melodies – there is definitely an edge to be found. “Yellow Eyes” has jangly shards of needle-guitar, thundering bass and acerbic vox; “Fester/Blister” is gruelling, relentless emotional hardcore – not dissimilar to Drenge; “Soulless Youth” is all interweaving six-stringer tentacles and distorted Molotov cocktail bursts of rhythm. It’s a pleasantly hectic melange, fuelled by grit and rage – it’s not as uncontrollable as traditional punk sounds, but it’s definitely more haywire than much of Eagulls.

These lads arrive bearing countless snide remarks and issues which they wish to expound opinions on. The sounds they make to accompany these words – a large focus being on the degeneration of modern society – may lack the bite of late ’70s punk, instead strolling into indie-rock, post-punk and guitar-pop territories, but their feelings remain true. Amidst the sanded-corner tunes and taut, buffed percussion, the five-piece have a lot of valuable ruminations on being young and hopeless and helpless in modern Britain. Expect gnarled frustration, glimmers of fury and sardonic anxiety.

It’s punk in its truest sense – DIY guitar music, singing songs of counter-culture, protest at the reigning government and the worst facets of modern life. All the while concentrating on getting screwy. It’s a galvanising moment in 2014′s already-precarious tumult.