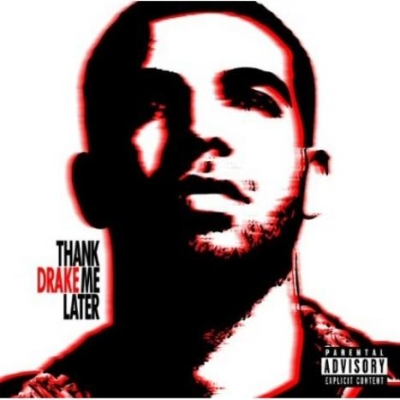 Drake is the great record industry hope of 2010 or at least the hip-hop version.  It’s hard to remember the last time there was an emerging rapper with the kind of real crossover pop stardom potential as Drake clearly has.  It was probably Nelly ten years ago and that’s not actually a bad comparison.  Drake, like Nelly before him, sings nearly as much as he raps and constructs songs that more closely follow pop song structure.  While Thank Me Later boasts the kind of strictly A-list guest spots (Jay, Wayne, Jeezy) and producers (Kanye, Swizz Beats, Timbaland) that are the hallmark of event releases, in this post-808’s and Heartbreak world–and can we all agree now that Kanye’s album was a visionary classic that was slept on because of its pettiness and misogyny?–and because of Drake’s ability to sing hooks and unique backstory, the album doesn’t follow the same boring formula of one-for-the-street, one-for-the-ladies that has made so many original voices sound generic while still failing to sell.  Instead, Drake, born Aubrey Graham, a Canadian with an African-American father who was raised by his white mother in an upper-middle class neighborhood and who starred as a teen in the Canadian TV show Degrassi: The Next Generation, continues in Kanye’s middle-class rap tradition of introspection instead of street-talk.  Drake is clearly coming from a different social mil-lieu than most other hip-hop artists; plenty of rappers come from single-parent households, but not many could relate to a line like, “How many of our parents’ marriages lasted?”  To many hip-hop heads, who prize authenticity over all else and for whom rap is forever tied to the inner-city experience, Drake is a personality-less and cynically commercial ploy from a flailing industry.  But Thank Me Later feels as personal and authentic as any other major rap release in recent memory.  The real problem for Drake is that in a genre that is intrinsically self-reflective, he sounds frustratingly shallow.

The actual songs on Thank Me Later aren’t nearly as bad as internets rap critics would have you believe.  The production throughout the album is on point and Drake is an undeniably competent if unexciting rapper who is exceptional when singing hooks.  Thank Me Later is a very listenable album with several songs that will get stuck in your head for days.  The album starts strong with three tracks (‘Fireworks,’ ‘Karaoke’ and ‘The Resistance’) that introduce both the sound (basically 808’s and Heartbreak) and theme (the lonely alienation that fame creates) of the album.  Towards the middle the album bogs down a bit and yet without any really bad songs besides ‘Over,’ the Frankenstein like monstrosity that awkwardly marries one of Drake’s smoothest hooks with a strident, martial beat and lame verses and that was somehow the lead single.  The run of guest stars that follows is largely uninspired, with the exception of the Swizz Beats track, ‘Fancy,’ which injects some real energy into the album and which features T.I., who, in a superstar turn, shows all the genuine charisma and playfulness that Drake lacks.

As a rapper, Drake has clearly modeled his style around two heroes: Young Money label head Lil’ Wayne and Kanye West.  Like Wayne, Drake peppers his rhymes with pop-culture free associations (“Bout to set it off, Set It Off, Jada Pinkett;” “Two thumbs up, Ebert & Roeper”) but without ever straying from his slightly monotonous flow he never captures the inspired, unhinged energy that Wayne had at his peak.  That’s just a stylistic touch; the Kanye comparison goes much deeper.  The album borrows 808’s spare sound of icy synths, auto-tune used to create an impersonal and lonesome effect and hip-hop drums.  In terms of lyrical content, Drake also takes a similarly dialectic approach as Kanye.  Whereas Kanye’s debut,The College Dropout, is largely about his internal struggle between his materialism and ambition and his social conscience.  Thank Me Later is largely about Drake’s internal struggle between his craving for fame and his lamenting how fame changed his life.  Without a doubt, Kanye is a deeper thinker; from the cultural touchstones that he references to the substance of the contradictions he embodies, Kanye has Drake beaten.  For someone who as emerged as a star only over the last year, much of Drake’s bitching about the frustrations of the life of a pop star sound unearned, but life in the Internet echo-chamber of 2010 moves fast and Drake’s complaints are almost assuredly the sincere expressions of a young man watching his life being transformed by fame and money.  Drake never tries to be anything he’s not–see his line from ‘The Resistance:’ “I avoided the Coke game and went with Sprite instead/that’s word to the millions that they putting up”–but if he’s uncomfortable with a life he sees as a kind of distasteful trap, he never offers much of an alternative.

In the end, Thank Me Later isn’t the aesthetic and cultural disaster so many bloggers have made it out to be nor is it the sound of an emerging Jay-Z/Eminem/Kanye type superstar that the record industry was hoping it would be.  Instead it falls squarely in the pop tradition of artists like John Cougar Mellencamp and Stone Temple Pilots, whose lack of originality or depth didn’t keep them from making some enjoyable music and selling a lot of records.  Drake is authentic and if that authenticity sounds narcissistic or shallow–“What am I doin’?  Oh yeah, that’s right, I’m doing me”–it’s still relatable enough that the album sold nearly 500,000 units in its first week of release.  This is the voice of hip-hop in 2010, like it or not.