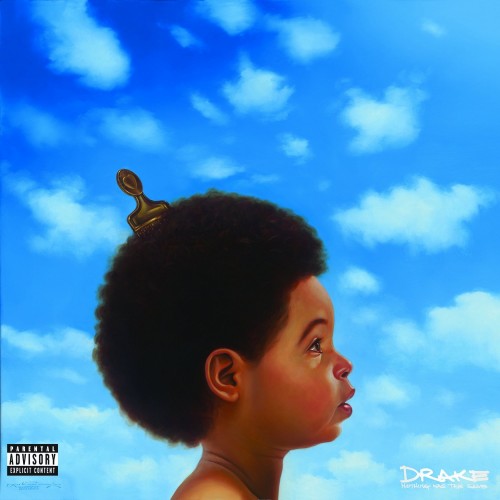 On Thank Me Later and Take Care, Drake struggled to reconcile his old life and relationships with his new found fame. That’s still largely the theme of his new album, Nothing Was the Same, but the tone is no longer so wounded or conflicted. Drake sounds like he’s finally found his footing in his new life. The title refers to the change that fame brought to Drake’s circumstances, but the lyrical theme of the album is that he himself is the one thing that’s still the same.

While he enjoys huge popularity, it’s nearly matched by disdain from the traditionalist segment of the rap audience, who expect their rap to be unemotional and violent and their rappers to come from real poverty. Drake is the antithesis of those expectations and maybe being the subject or countless memes and punchlines has hardened him. Nothing Was the Same is a tougher, more grown up album than he’s made before and, if it never quite reaches the emotional depth of Take Care’s ‘Marvin’s Room’ or ‘Take Care’, it surpasses the previous album in consistency and unity of vision.

That unity is largely achieved by eliminating outside influences. The guest list is limited to a handful of singers and a single rapper (Jay-Z, who drops a typically pedestrian verse on ‘Pound Cake/Paris Morton Music 2’). Drake’s OVO Sound partner, the producer Noah “40″ Shebib, produces or co-produces eight of the nine first tracks and the producers of the remaining songs largely follow his signature moody, subdued production template. Many of the songs don’t follow a normal verse-chorus-verse formula. One of 40’s best tricks is to flip the track halfway through, either so it sounds like a totally new song (‘Tuscan Leather’ or ‘Furthest Thing’) or as a more subtle metamorphosis that continues the song’s mood but takes it in a new direction (‘Connect’ or the excellent bonus track ‘Come Thru’). Combined with the consistency of the production, the amorphous song structure helps make the album feel all of one piece. ‘Wu-Tang Forever‘ (samples the chorus of the Wu-Tang Clan’s ‘It’s Yours’ and then bleeds into ‘Own It’ with its refrain of “Guess whose it is?/It’s yours.” Touches like this make it clear that Nothing Was the Same is not just a collection of songs; it was conceived of as an album.

Things get under way with ‘Tuscan Leather,’ six minutes of three different beats and no choruses. The song is a self-conscious showcase for Drake the rapper as he flows effortlessly over the changing scenery. The song begins as anachronistic chipmunk soul before flipping to something harder with more bass and then again to a signature 40 synth-driven beat. That leads into one of the album’s best songs, ‘Furthest Thing.’ Drake returns to the theme of having not changed from his pre-fame days but with an interesting twist. He worries that people he knows from before he was famous think that he’s changed; he raps/sings ”Nothing really changed but they still look at me a way now/What more can I say now?/You might feel like nothing was the same.” But he hasn’t changed, he says, and proceeds to confess his sins: “I still been drinking on the low/mobbing on the low/fucking on the low/smoking on the low/I still been plotting on the low/scheming on the low/the furthest thing from perfect like everyone I know.” In other words, he’s still just as flawed a person as he was before he was famous, it’s just harder to see now because of the bright lights of fame and the glow of the good life. Not only is Drake still a bad person but those foibles make him just like everyone else. It would be a remarkably self-loathing, cynical moment if the song ended there, but it doesn’t. Instead the beat flips back to ‘Tuscan Leather’s’ chipmunk soul as Drake raps “This is the life for me” and sweeps introspection aside.

The next song is the monster hit ‘Started from the Bottom’, probably the coldest, hardest sounding song in Drake’s catalogue, a determined, unapologetic declaration of realness. Being real is, perhaps counter-intuitively, maybe defensively, a point of pride for Drake. To him, being real means staying true to himself and his roots; he isn’t a gangster but he claims that everything he raps about is true. How many rappers can say that? Realness is a topic he returns to again and again from the intro (“Wanted to tell you, ‘Accept yourself’/You don’t have prove shit to no one but yourself”) to album closer ‘Pound Cake’: “I’m authentic, real name, no gimmicks.”

Still, for my money, Drake is at his best when he goes softer. Some of the album’s highlights include the gorgeous, rap-less R&B single ‘Hold On, We’re Going Home’ and ‘Too Much’, which features an otherworldly chorus from the British R&B singer Sampha, who previously collaborated with Drake on ‘The Motion’ (an awesome song only available as a bonus track on the Best Buy version of the album) and who on ‘Too Much’ sounds eerily like a black Antony Hegarty. Bonus track ‘Come Thru,’ is a sweet daydream come-on to a girl Drake used to hook up with. The song stands out for its unusually warm sound and Drake’s lack of recrimination, either of himself or of the girl. But, as on ‘Furthest Thing’, the song takes an emotional left turn. Drake’s voice freezes on “thru,” the last word of the chorus, and repeats again and again as the song switches to an icy, minor key. The sunniest song on the album ends with Drake singing plaintively, “Why has it been so long?”

Drake is a unique talent, a true double-threat – ”Drake featuring Drake” as he put it – and his skills are on full display here, from the effortless way he co-opts the Migos flow on ‘305 to My City’ and makes it his own to the smooth and affecting singing at the end of ‘Connect.’ He has a musical soulmate in 40. But he’s always had those gifts. Nothing Was the Same is different because Drake has stopped worrying so much about who he’s become and figured out who he is. As he puts it on ‘Pound Cake’, “You know you’re real when you are who you say you are.”

Stream Nothing Was The Same.