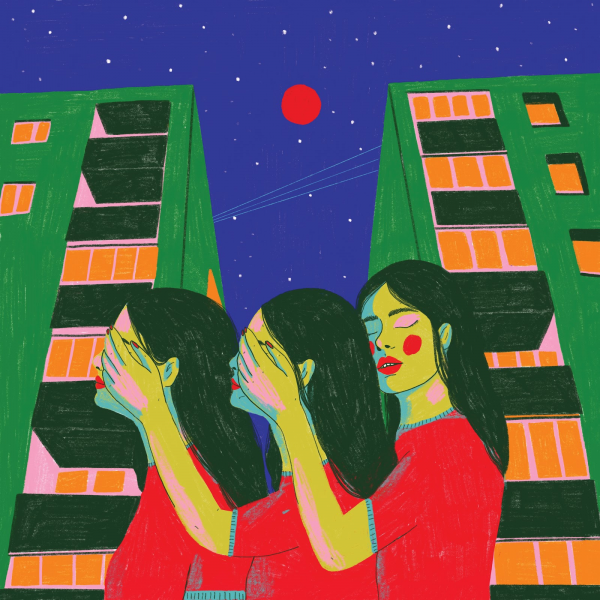 Back in 2017, I reviewed the debut album from New York State’s Diet Cig, Swear I’m Good At This. It took less than a single playthrough before the combination of clean/crunchy guitars, clattering percussion and Alex Luciano’s confessional, sweet/sour vocals won me over. It was a rose-tinted return to high school summer holidays, replete with the loss and loss, the underage drinking and all the heightened teenage angst that went with it. I was hooked.

Now after what feels like a long three years, Diet Cig return with follow up album Do You Wonder About Me?, and thankfully, it’s business as usual for the New York duo.

The result is ten tracks that will be instantly familiar to anyone who spent any time with the band’s material before. What soon becomes evident is just how much Diet Cig have matured. Not just as musicians, but as people.

If their first record was rooted in acceptance, in knowing that it’s okay to be who you are, Do You Wonder About Me? digs deeper than that, interested in understanding not just who you are but why you are who you are and in accepting the negatives that come with that.

Take lead single "Night Terrors" for instance. Somewhat slower than one might expect, it’s a loping insight into one’s past iterations, and in working out how each of those people have made you who you are today. Similarly, "Broken Body" takes its inspiration from a similar, albeit more negative place; its images of self-loathing and 20-something anxieties feeling all too universal.

Elsewhere, the likes of "Priority Mail" or "Makeout" feel more like musical vignettes than established tracks, something that clearly stems from the artistic freedom the band felt when writing and recording the record.

Indeed, this is something obvious across the record as a whole. "Flash Floods" for instance, is 95 seconds of pure punk energy that’s quickly followed up by "Worth the Wait", which pairs typical Diet Cig acoustic intimacy with understated synth chords for the first time.

If Diet Cig’s debut felt like a return to your teenage years, then Do You Wonder About Me? is your equally uncertain but somehow more confident twenties. Self-doubt and anxiety still flow through the veins of the record, albeit quieter and much more introspective, but this time it’s darker, and more matured. A vital record of universal emotions that makes the current global mantra of “we’re all in this together” feel just that bit more believable.