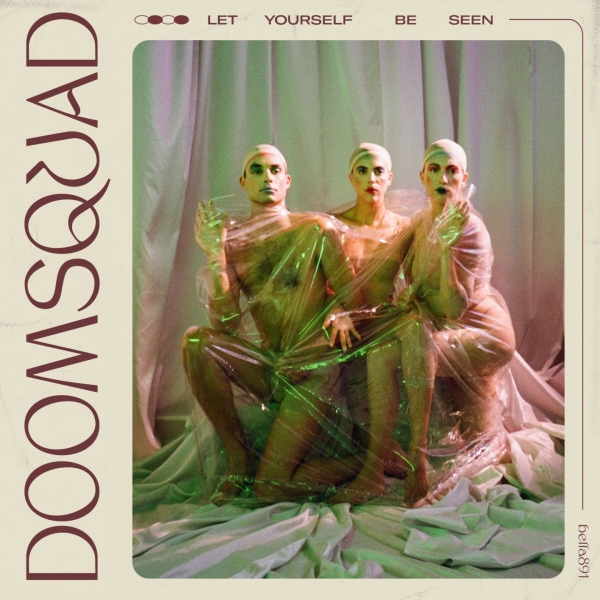 Bands, especially modern bands who know that they have maybe a few seconds or a few sentences to get new fans on board with their music, rarely mention oblique reference points or outré inspirations when trying to sell their new records.

Sibling trio DOOMSQUAD clearly could not care less about attracting any old listener, they are far more interested in hooking in discerning, muso fans of decades of out-there sound. For their new record, Let Yourself Be Seen, the folks they say influenced them are Peter Gabriel, Diamanda Galás, Genesis P-Orridge and Underworld. And they also want you know that they love acid house, West African disco, spiritual jazz, NYC no-wave and new-age ambient music. So far, so unorthodox – unless you’re LCD Soundsystem, who have almost exactly the same pool of influences.

While they’re not lying – all of those influences are apparent and abundant – this is a crowd-pleasing, appealing sound that also leans on Talking Heads’ plastic funk, Junkie XL techno, tempered psychedelic dance-pop and stylish, shades-on new wave. It’s diverse but never distracting, kaleidoscopic but never disorientating. Siblings Trevor, Jaclyn and Allie Blumas play various instruments over the record, and the combination and blend of their voices throughout the album sets them apart from other bands in this genre – they have many, many weapons in their arsenal, and there are lots of highlights and intriguing touches across the album.

The first real track, “General Hum”, is probably the best thing on the record. It’s constructed in blocks, a geometric fantasia of Balearic haze, rolling analogue keyboard bass, James Murphy/David Byrne/Philip Oakey vocal patterns and disembodied synthetic strings (is that supposed to be a violin?)

“Aimless” has a cold, hissing rhythm, and Trevor’s vocals stay in that zany, wired sprechgesang mode throughout, getting gradually wilder as the track progresses. The construction of the sonic backdrop sounds elegant, and considered – the kind of building that Factory Floor do.

“Let It Go” is insistent and menacing, no doubt an acknowledgment of their love of Underworld. But they come across more like Underworld remixing something by The xx. Which is no bad thing at all. “Emma” is a showcase for the girls’ delicate vocal interplay, but what follows, “Dorian’s Closet”, is an absolute masterpiece. It’s produced from the ground up with swelling 80s signifiers from obnoxiously loud guitars (real or synthesised, it doesn’t really matter) and throbbing bass stabs that seem to appear at random.

The thunderous beat of “Let Yourself Be Seen” builds slowly and gradually, taking its cues from house and rave music circa 1997. It’s unashamedly, gloriously tacky – especially in 2019. It sounds like something you might have expected The Prodigy to include on the Blade soundtrack if they hadn’t had to turn down the project due to other commitments. Put simply, it’s brilliant – an inspired choice.

“The Last Two Palms Trees in L.A.” sounds like Xiu Xiu on a Chromatics binge, constructed entirely out of sounds heard in David Lynch soundtracks. There are soft, gauzy synth washes, insistent vocals and backing vocals stacked higher than the titular trees. “Weather Patterns”, which closes the record, finds Trevor in Lizard King/Philip Oakey mode, preaching and bellowing on top of a techno take on hazy summer atmospherics.

As much as this is a studied, muso set of unfashionably fashionable sounds, it isn’t a cynical attempt to recreate the moods of yore. This is music made my crate-diggers and playlist enthusiasts for those with a slightly wider scope for dance music than the majority of modern listeners. As music made for the “Ah! I knew I’d heard that before” crowd, it’s successful. As a synthesis of old and new, it’s successful. As an album of dance music, it’s incredibly successful, and leaves no room for any cynical raised eyebrows as soon as it gets going – leave your preconceptions in the cloak room.

As Funkadelic once professed, if you free your mind, your ass will follow.