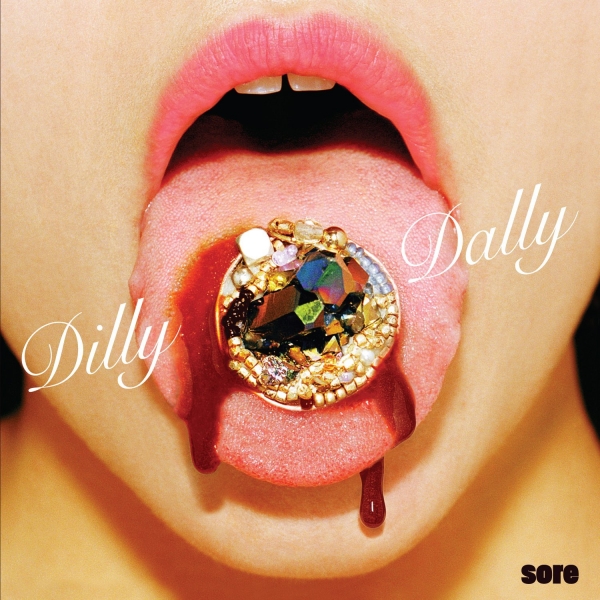 It’s rare today to see rock and roll frontwomen of the Kim Gordon, Kathleen Hanna or even Courtney Love ilk, a whirling dervish of unconventional femininity, power and don’t give a fuckery amplified through a prism of electric guitars with attention grabbing ability. However, with debut album Sore landing from Toronto outfit Dilly Dally, we might have found one.

Originally an all female outfit consisting of guitarists Katie Monks and Liz Ball, this garage punk force has evolved and gathered momentum with the addition of new bassist Jimmy Tony and drummer Ben Reinhartz, but it's the sheer depth of Monk’s voice that first hits you with this record. Unapologetic and screaming with a short lifetime’s of angst and experience, it’s a voice that’ll split tender eardrums as it pitches and heaves with every spat out lyric.

An eleven-track rollercoaster ride through the seven deadly sins, Sore speaks volumes. Opening number “Desire” is seeped in sexuality, the female libido and all that goes with it. Gritty with rolling guitar hooks and guttural treatment, it’s a Nirvana fan's aural wet dream as Monks paints a rightly unashamedly vivid picture of a basic urges. Her unchastised honesty is refreshing in the climate of new feminist waves, and as a lead single, it’s a clear statement of intent.

The album is not a one trick pony though. There’s no let up with the more drawling but no less energetic “Snake Head”, where Monks dissects those who have done her wrong over clattering drums and another cutting guitar hook. In many ways on tracks such as “Snake Head, with its take on menstruation (“Snakes are coming out of my head / And there’s blood between my legs’) and accusation that “creatures are fucking with my shit”, Dilly Dally’s lyrical content is like an illicit riffle through a big sister's teenage diary. Its snotty, sweaty and bloody filled, with all the whole female package, blemishes and beauty, laid out bare.

The foursome have also cleverly crafted an instantly recognisable sound that’ll last with songs like “Purple Rage” fitting into a heart shaped box that could have come straight from Seattle or Olympia. It's all angry chords, relentlessly crashing drums and ominous bass to its core, but after “Desire” you’re left wanting exactly that. Don’t be fooled into thinking there’s a break with the slower more considered “Witchman”, because it erupts again for the fiery “Green” before burning on with licks of guitars in “Ice Cream”. There’s even semi ballad "Burned by the Cold" to finish things; with piano coming out of nowhere, it feels like the final credits to a exciting adventure.

With the marks of a seminal first album, Sore examines emotional bruises that run deep. With that Dilly Dally have crafted a well formrf rock album that’ll surely go to make Katie Monks the next pin up girl of the anti-pin up girls. This band may have been created on what lies on fringe of society, but as is often the case, it makes for all the better listening.