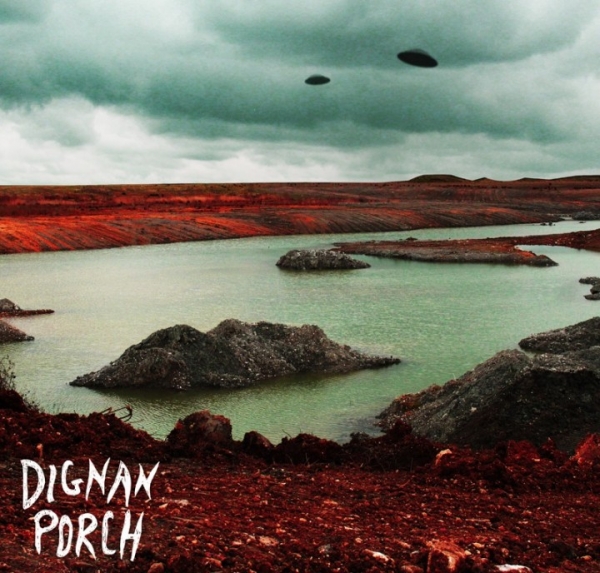 Okay, let’s do the checklist before we start. The name? Meaningless, apparently. Album number one, or album number two? Let’s call Nothing Bad Will Ever Happen the debut album from the band Dignan Porch. The “first” record, Tendrils, was recorded and played as a solo venture by Joe Walsh, but this time around he’s got his brother Sam, plus friends Ben Goodwin, Hayley Akins and Stephen Keane along for the ride. Album recording? Live reel-to-reel in the studio, with “minimal overdubs”. The sound? Reviews say it’s” lo-fi fuzz pop”.

Lo-fi fuzz pop is a rather simplistic way to approach the charming, psychedelic, layered, intelligent, fragile and honest record that is Nothing Bad Will Ever Happen. “Lo-fi fuzz pop” is the sort of music plied by instantly forgettable bands like Yuck, and really doesn’t cover the songs of Dignan Porch in even the most barely adequate of ways. Walsh’s outfit channel the sound of British psych bands like early Pink Floyd or the Television Personalities, but even more than that there’s an Antipodean flavour to their music that recalls (occasionally) The Go-Betweens and (mostly) the roster of New Zealand’s Flying Nun label, home to post-punk legends The Chills and The Clean, amongst others. The live recording of the album gives an immediacy and warmth that might not have been present if it had been produced and mastered within an inch of its life. There’s a moment on ‘Sad Shape’ where a guitar solo sounding like Thumbs-Up Macca straining in vain for the high notes on ‘Hey Jude’ takes the song to its conclusion; it could have been manipulated down to a lower register or re-recorded, but the fact it remains and doesn’t impact negatively on the song is just one example of the many sweet (and slightly ramshackle) points Dignan Porch gives the listener.

The rolling drums and jangle of the opening track, ‘Picking Up Dust’, sets a (on the surface) positive tone straight from the off, sounding like a classic Grant McLennan track before the aforementioned ‘Sad Shape’ throws some Pavement-esque shapes and moves. If you search it out there’s a glorious organ line buried in the wordless chorus, introduced by Walsh’s exuberant cry of “One, two, three, four”. Despite being called ‘Darkness’, there’s brightness throughout that rattling track, with Walsh singing “Though the darkness/I saw light/It was all I saw” over a treated, watery guitar line, while ‘TV Shows’ (an alternative version of which, the punky ‘Cancelled TV Shows’, appears later on the record) provides the first moment of introspection and the first time we can properly hear the harmonies of Walsh and Akins, both assuring us that things are going to be okay. Equally downbeat is album highlight ‘Pink Oil’; a song that has a languid solo as its crowning centrepiece (boy, do Dignan Porch know how to play a killer solo, something of a lost art) and recalls Dean Wareham’s Luna at their saddest.

There’s a terrific feel to much of this record, typified by the motorik groove of ‘Sleeping With the Dead’ in which the guitars crunch pleasingly and the drum sound is just about perfect; the on-the-surface indie simplicity of ‘Never’ which is disrupted at the right moment by some heroic soloing or the organ droning through the middle of ‘Sixteen Hits’. For the most part, Dignan Porch are on the money – sure, there are a couple of slightly duff moments that disrupt the mood but let’s not dwell on them – and it really pays off. Captured Tracks, the Brooklyn-based label, have chosen wisely in selecting the band as the only UK act on their roster. Nothing Bad Will Ever Happen is a reminder that simple indie pop music, played with heart and a nod to the past, has its place and that – when it’s done as well as this – it can still hit the spot.