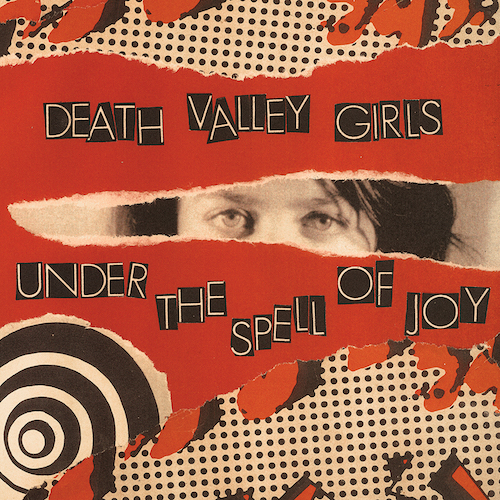 Death Valley Girls’ new record is their fourth winner in a row. The band, made up of Bonnie Bloomgarden on vocals, and a range of supporting musicians, have spent the seven years since their formation perfecting a blend of fuzzy, scuzzy garage rock, catching the ear of Iggy Pop and other tastemakers along the way.

Under the Spell of Joy shares a name with the 2014 album by San Diego hard rockers JOY – and it’s no coincidence. Bloomgarden decided that the title of the record would be a tribute to a JOY t-shirt she wore for five years straight, after coming to see it as some kind of good luck charm, a talisman of sorts. The title, emblazoned on the shirt, represented “manifesting your biggest dreams and responding thoughtfully and mindfully to everything that comes in your path with joy and compassion first,” Bloomgarden explains in the press release.

The album opens with “Hypnagogia”, which sets the tone for the record beautifully, with its powerful guitars and riotous saxophones evoking the kind of post-punk/world music experimentalism of the early '80s.

“Hold My Hand” imagines Patti Smith as the leader of The Velvet Underground, while the title track pushes into a realm you’d be more likely to find Iggy Pop lurking in during the early '70s, all zombie chug and honking sax. Mid-album highlight “Bliss Out” continues the otherworldly, exploratory tone, which culminates in the claustrophobic mayhem of “10 Day Miracle Challenge”, which sounds like an alternate universe version of Hawkwind that emerged from Detroit rather than Ladbroke Grove.

Of the rest of the tracks, the clear highlight is “The Universe”, which manages to pull off a fine balancing act, sitting in the middle of a Patti Smith/Velvet Underground/Pharoah Sanders triangle. It’s a beauty, and it represents everything that Death Valley Girls do especially well. The only real misstep is “I’d Rather Be Dreaming”, which is a little listless, and a little aimless, buried as it is right at the end of the album. The actual closer, “Dream Cleaver”, is miles better.

Death Valley Girls’ music is, for better or worse, calculatedly disposable, and the band make no real attempts to secure lasting hooks or forge undeniable melodies. What they do, they do well, and that’s more than enough reason to give Under the Spell of Joy a spin.